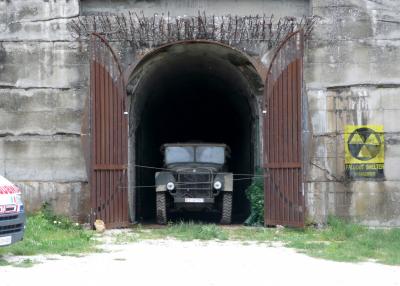 SANT'ORESTE-For over 50 years, the vast bunker in the heart of Mt Soratte was a well-kept secret- Few people knew of its strategic role in the last World War and, later, during the uneasy years of the Cold War.

Even the people of Sant'Oreste village, which lay just below the site, did not know exactly what was going on behind the barbed wire barricades surrounding the nearby off-limits military zone. In 1980, the army finally moved out. The abandoned area became smothered in undergrowth and the dark galleries full of debris were considered unsafe. Nobody ventured there – except for a few mysterious characters armed with pickaxes and hammers who spent hours surreptitiously sounding the walls and floors looking for hidden cavities.

It was murmured that they were searching for the lost gold stolen by the Nazis from the vaults of the Bank of Italy and never since recovered. So far, no treasure has come to light, but the bunker could prove to be a money spinner in its own right.

In 2001 Sant'Oreste village began, bit by bit, to purchase the derelict site and its surrounding war-time buildings and after a long and laborious restoration process an association of enterprising young locals have now opened it to the public. The work involved clearing out debris and laying out pavements and walkways, as well as reconstructing some of the original features, such as a radio station, operational centre and dormitory. The entrance hall has been converted into an auditorium showing documentary footage of the war years and the former German headquarters outside have been converted into a hotel, restaurant and cultural centre.

Between 1937 and 1943, over a thousand Italian miners and labourers toiled deep in the heart of Mount Soratte, a craggy volcanic plug some 45 kms north of Rome, to create a secret labyrinth in the hard limestone rock.

Although the project was begun some years before World War II broke out, the Italian dictator Benito Mussolini must have had a premonition of what lay ahead and decided to take precautions. The Soratte bunker was to be an impregnable stronghold that could save the lives of key members of the establishment in the event of bomb attacks on the capital. Its nearness to Rome meant – it was argued – that not only could the privileged few get there quickly and easily, but that the business of command could be carried on from there.

In many ways, it was a work of genius, highly advanced for its time. The tunnels were reinforced with a layer of cement up to a meter thick and they extended to a depth of over 300 meters underground. Italian engineers created an independently functioning subterranean city that was initially to spread along 14 kms of galleries deep under the mountain. It had its own water supply, a heating system, electric generator, sewers, radio communications, dormitories, kitchens, storerooms and arms deposits and was calculated to give two months' autonomy for an estimated hundred or so people.

In actual fact, only 4.2 kms of galleries were completed before Italy capitulated on the 8th September 1843 and the German army took over the site. For ten months, it was occupied by the Wehrmacht troops under General Field Marshall Albert Kesselring and it was at this point that it became the stuff of legends. It is believed (and apparently partly documented) that a portion of the 117 tons of gold stolen from the reserves of the Bank of Italy was taken to the Soratte bunker. 68 (or 79 – accounts vary) wooden crates of bullion, jewellery and precious objects from the bank's vaults were conveyed to the bunker in great secrecy.

The 18 soldiers who took part in the transportation were shot so that they could give nothing away. However, so the story goes, one soldier – a certain Willy Vogt - survived by feigning dead. He escaped and managed to make his way back to his Austrian homeland. After the war, he began to talk but he was mysteriously murdered before he could give any concrete information.

On the 12th May 1944, the Allies unleashed a massive bomb attack on the bunker. They knew they would be unable to destroy the entire complex, so they aimed for the entrances and the surrounding woodland so that no-one could survive the resulting fire and devastation. During our tour, we were shown a short film documenting the raid and listened to an extract from the diary of one of the US pilots involved. The attack had been planned for the morning, but the mountain was shrouded in mist and visibility was poor. Since the Allies had strict orders not to hit the nearby village - the pilot recorded - the second squadron of B-17s – the celebrated "Flying Fortresses" - took off from Foggia to do the job in the afternoon. The result of the devastating attack is still evident in the piles of rubble you can see in the rooms that were nearest the exit.

Kesselring and his troops had already abandoned the bunker, but not before they had mined the galleries and (some say!) walled up the stolen treasure. The gold rush began in earnest in the early 1960s. The main character in this Indiano Jones-type quest was a certain Baron Giuseppe Fortezza, who managed to wangle a permit from the Italian Defense Ministry and was flanked in his search by officers of the Genio Militare (the Italian Engineer Corps). The Baron searched for Kesselring's gold on and off for thirty years, but he had no luck. His lack of success, however, did not extinguish the legend. Although the bunker is now secured against intruders, the lure of hidden treasure still casts its spell.

The Bunker Soratte Association that now conducts guided tours through the maze of tunnels play down the story. They believe that the Germans had time to remove the gold before the Allied attack and make good their escape north. However, treasure or no treasure, the bunker, which they claim is the biggest of its kind in Europe open at present to the public, makes a fascinating visit, if only for the dimensions and scope of the structure alone. The galleries are high roofed and adequately lit to counteract feelings of claustrophobia, though life there for days on end wouldn't have been pleasant.

After the War, the place was used as a weapons deposit until 1967, then, in the middle of the Cold War years, the Italian government – again in great secrecy - transformed one section in the deepest and most remote part of the galleries into an anti-atomic shelter in case of nuclear attack. Again, the technology used is impressive. This shelter, which occupied a quarter of the entire complex, was on three levels, and built to withstand not only nuclear explosions and fall-out effects, but also earthquakes. It also contained a suite of rooms reserved for the President of Italy and the head of government. Fortunately, it was never used!

The Bunker Soratte Association plans to run guided tours of the bunker every weekend during the summer. 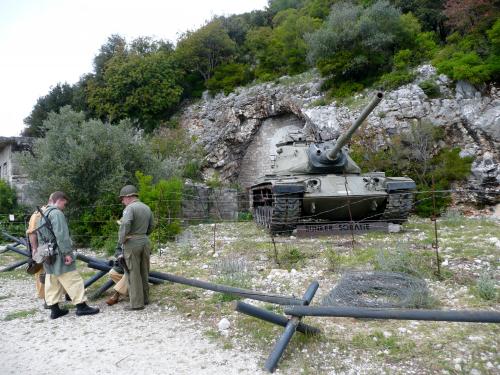 Wartime uniforms and a tank at the bunker
Culture
Italy