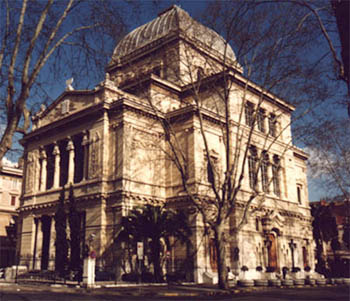 ROME- The Jewish museum in the Eternal City was to stay open until late Monday as a protest against the Brussels anti Semitic attack that killed four people.

The Roman Jewish community have announced that the museum inside Rome’s main synagogue, which normally shuts at five in the afternoon, will stay open until late to pay respect to the victims of the recent Brussels Jewish Museum attack.

Ricardo Pacifici, president of the Jewish community in Rome said; “Our response to the attack, an all night opening to launch a message of courage.”

Mr Pacifici further added; "We'll meet with the leaders of the Jewish world and tell them to hold on and not to be intimidated. We want to let them know that we are all in the same boat and that a death in Brussels is like a death in Rome.”

The gunman who carried out the attack and who was seen entering the museum on security camera footage in a black baseball cap, killed four people; an Israeli tourist couple, Emmanuel and Miriam Riva, a French citizen and a 23 year old employee of the museum, Alexandre Sterns, who died on Sunday after being held in hospital.

The United Nations chief Ban Ki-Moon’s spokesman said that the secretary general “reiterates his strong condemnation of all forms of racism, racial discrimination, xenophobia and trusts that Belgium authorities will do everything possible to bring the perpetrator or perpetrators of this crime to justice.”

Mr Pacifici concludes; “We are not afraid but we are angry. We are aware that we live in danger. But this does not prevent us from living a normal life. For this reason we have decided that the best way to respond to those who try to intimidate us, to those who want to isolate us, is to raise the price; we are here to meet the challenge of the anti-Semites, neo-Nazis and mad people. We expect to see many non-Roman and Roman citizens who have come to pay tribute to those killed.”