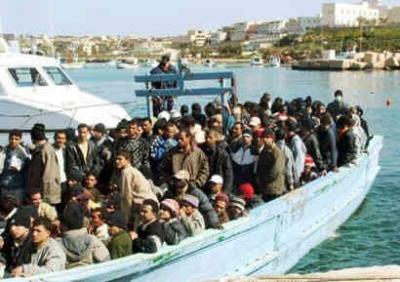 At least two ships carrying hundreds illegal immigrants trying to reach the Italian island of Lampedusa have sunk off the Libyan coast in one of the worst tragedies of its kind in the Meditteranean, Libyan coast guard officials said.

In all four vessels packed with immigrants were in difficulty off the coast of Libya on Monday and the International Organization for Migration said at least two of the craft had sank leaving some 300 people at least believed to be missing. Some 350 people aboard a third ship were rescued by an Italian tug.

The emigrants, many of them Egyptians, are believed to have boarded the smugglers’ vessels close to the Libyan capital of Tripoli, the Egyptian news agency MENA said. Libya has been dragging its feet for years over cooperating with international efforts to prevent desperate Africans making the perilous journey to Lampedusa from North Africa.

The Italian Interior Minister, Roberto Maroni, claims that the flow of emigrants will stop May 15 when joint patrols between the Italian and Libyan navy ships off the Libyan shores start. The minister did not say why six weeks has to elapse before the murderous trafficking in people can be curbed or how many more lives will be lost before the slow-moving bureaucracies of Italy ans Libya at last have some impact in the Straits of Sicily.