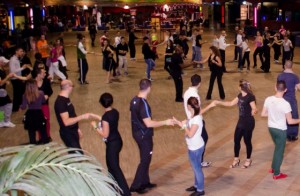 ROME - Latin American rhythms beat in the heart of eternal city: due to the roman’s passion for dancing salsa Latin dance schools have begun teaching the complex moves and ‘pasitos’ of the dance, while clubs have started to organize Latin nights during the week.

This ‘folia latina’, which, besides Cuban salsa, includes bachata, rumba, afro and timba, started nearly 20 years ago. Although it experienced many ups and downs during that time, it’s still alive and thriving today. It was Jaime Otalora, from Venezuela to open the first salsa school in Rome in 1986, who was then followed by hundreds of ‘maestri’ who came from Cuba and other Latin American and Caribbean countries.

Salsa, a combination of African, Cuban and Latin music, is a street dance, strictly linked to the music and culture of the countries it comes from. It still appeals to many people, such as inhabitants of Rome, because it fulfills their desire for socializing, having fun, feeling sexy and keeping fit.

In addition, salsa dancers feel part of a special community that reaches out to the entire globe.  ‘’There is nothing quite like the almost universal language of dancing salsa socially with a friend or a complete stranger – says a young dancer – it’s magic.’’

If you want to give salsa dancing in Rome a try you can go to clubs such as Palacavicchi, which is one of the biggest, or Arcadia, Salsedine, Caraibe, Caruso…And when it gets slightly hotter, open air clubs, like Tropicana or Parco Egeria, which open up their doors allowing you to dance the night away under the stars.

Besides clubs and schools, roman salsa dancers love attending ‘full immersion’ salsa events, such as the imminent ‘Salsa a la Playa’.  The final weekend of this month over 1000  people  are expected to flock to the Adriatic shores of  Montesilvano, Abruzzo, to dance salsa and a variety of Latin dances for 3 whole days, with the best teachers in the country also attending (Salsa a la Playa - Timbatumba Eventi).