Former US envoy in “swingers” fiasco 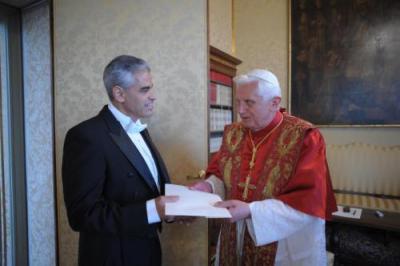 Diaz now has been hired by Loyal University Chicago, the Chicago Sun Times reported. An investigation of Diaz while he was a professor at the University of Dayton following complaints by two married professors found that “there was reasonable cause to believe” that conduct by the former envoy to the Holy See “constituted sexual harassment that created an intimidating, hostile or offensive environment,” Inside-Higher-Ed.com reported.

Havana-born Diaz was professor of faith and culture at Dayton. He was US Ambassador to the Vatican from 2009 to 2012, narrowly defeating Caroline Kennedy for the prestigious appointment.

Il Messaggero said that “the hypothesis that a Catholic theologian suggested a sexual encounter with another man and another woman and that he made unwanted requests to university colleagues could pose problems for Diaz.”

Diaz is a former president of the Academy of Catholic Hispanic Theologians of the United States. He accepted an appointment at Loyola as John Courtney Murray University Chair in Public Service and as professor of theology.