Bouteflika sworn in, what next in Algeria? 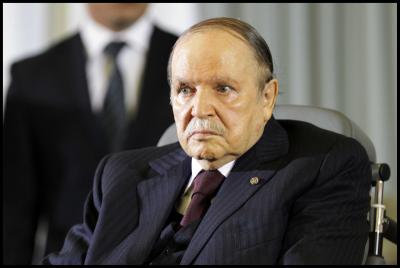 NEW YORK-When supporters began celebrating Abdelaziz Bouteflika’s fourth term even before the results of the Algerian presidential election had been confirmed, it was clear he was heading towards a landslide victory in a contest many critics maintain was neither free nor fair.

Mr Bouteflika received 81.5 per cent of the vote. Former prime minister Ali Benflis finished second with just 12.18 per cent in an election marred by a low turnout. The youngest candidate, Abdelaziz Belaid, came third with 3.03 per cent. Three other candidates also participated in the election, but failed to gather any great support.

Mr Bouteflika still remains popular with many Algerians who credit him with helping to end a devastating civil war and containing “Arab Spring” protests. Although critics of this narrative point to the president “buying” peace in Algeriaduring the uprisings by raising public sector salaries and increasing subsidies.

But now that Mr Bouteflika has been sworn in for a fourth term as Algeria’s president, others question his ability to rule effectively after he suffered a stroke last year.

His election campaign was run by others and he did not give a single speech.

During the inauguration ceremony, the 77-year-old – who has already been in power for 15 years and will now lead the government for another five – struggled to communicate. In an investiture that was boycotted by opposition parties, Mr Bouteflika spoke in a frail and husky voice as he repeated the oath read out by the head of Algeria’s Supreme Court.

Later, in a brief inauguration speech before the army’s top brass, senior officials and foreign diplomats, Mr Bouteflika reintroduced the political reforms he had announced in 2011.

The president said the revision of the country’s constitution will “strengthen the separation of powers, reinforce the independence of the judiciary and the role of parliament, and would further guarantee the rights and freedoms of people”.

He has always campaigned as “the candidate of stability and security,” but can the ailing and frail president really deliver?

In truth, it is very hard to see a largely incapacitated president holding to these promises.

Immediately after his investiture, Mr Bouteflika reappointed Abdelmalek Sellal as prime minister. There will be fierce competition for positions among the president’s courtesans and those who ran his election campaign.

The concern of those around Mr Bouteflika is to perpetuate the system of privileges that surrounds the presidential court.

Undoubtedly though, the question of who follows Mr Bouteflika is the most important challenge facing the system. A number of serious contenders are jostling for position in the potential post-Bouteflika order.

The revision of the constitution will ultimately create a vice-president position.

This fact has already whetted the appetite of his brother Said Bouteflika and several political figures, such as former prime ministers, including Ahmed Ouyahia and Abdelaziz Belkhadem, as well as Abdelkader Bensalah, the head of the senate. All three perceive themselves as natural heirs to the throne.

The battle promises to be uncompromising as other politicians – such as Mouloud Hamrouche, another former prime minister – are also known to seek higher office. Each one of these candidates is sufficiently connected within powerful civil and military circles to achieve their ambitions.

Yet, it should be mentioned that tensions have been heightened by Mr Bouteflika’s re-election and it will be hard for his next term to progress without a hitch.

The election results and the low turnout have galvanised parts of the opposition.

The parties who boycotted the election have united and called for a national conference on May 17, 2014to discuss a political transition.

Such a transition, however far-fetched that might seem, would seek to amend the constitution, impose term limits on any future president, strengthen the judiciary and give parliament some much needed authority.

But as long as the ruling elite continues to resist wholesale political change, tumultuous times lie ahead for Algeria. Millions of Algerians remain disheartened by widespread unemployment, cronyism and high-level corruption scandals that encumber the private sector and deter foreign investors.

Dr Abdelkader Cheref is a professor at the State University of New York at Potsdam. This article first appeared in The National.