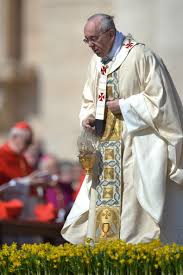 VATICAN CITY– Pope Francis marked Easter Sunday by urging the world to “defeat the plague of hunger, aggravated by conflicts and the immense waste with which we are often complicit.”

Delivering his traditional Urbi et Orbi (to the city and the world) address to a vast crowd of tens of thousands in St Peter’s Square, the pontiff urged mankind “to protect the defenceless, above all the children, women and old people, often objects of exploitation or abandon.”

Speaking from the central loggia balcony of St Peter’s Basilica, the Latin American pope also underlined his concern for Africa, saying “cure the brothers stricken by the Ebola epidemic in Guinea Conakry, Sierra Leone e Liberia, and those affected by so any other illnesses, which are spread also by neglect and extreme poverty.”

The Roman Catholic leader also spoke out on behalf of migrants. “Comfort those who left their own lands to migrate to places where they can hope in a better future, to live a life with dignity and, often, profess their faith freely.”

“Console those who today cannot celebrate Easter because their dear ones have unjustly been snatched fom their affection, such as the numerous people, priests and lay people, who have been kidnapped in different parts of the world.”

“I pray to you, glorious Jesus,” Francis continued, “to end every war, every hostility large or small, old or recent”

He specifically called for peace in Central Africa, in Syria -- calling for “the boldness to negotiate peace” – and for the negotiations between Israelis and Palestinians.

“We beseech you in particular for Syria, beloved Syria, that those who suffer the consequences of the conflict may receive the necessary humanitarian aid and the warring parties no longer use force to sow death, especially against helpless populations.”

Francis last year received in audience the Director General of the UN Food and Agriculture Organisation, FAO, José Graziano da Silva, an agency that was founded to end hunger but that critics claim is more interested in administering itself.