Comment: Hungary is becoming the biggest reason to leave the EU 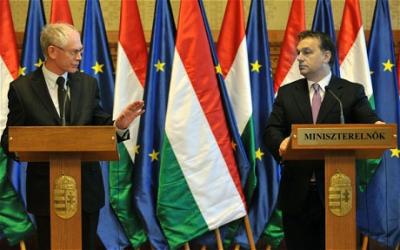 LONDON-Revanchist nationalists of different stripes have just won 65 percent of the vote in post-democratic Hungary --The mystical Jew-baiting Jobbik party increased its share to 20 percent, so no doubt we will see more of its Magyar Garda rallies and Arrow Cross nostalgia.

The Fidesz ruling party – and serial violator – has a seemingly unbreakable grip over the governing machinery of a mid-sized EU state in the heart of central Europe. It has harassed the media (I mean seriously, not like Leveson), purged the judiciary, and muzzled the opposition by banning paid TV advertising and greatly restricting campaign access to the public networks – even as it flooded the airwaves with its own message.

Let us not forget that Hungary has handed out Hungarian passports to many of the 500,000 Hungarians of the Magyar diaspora caught on the wrong side of the border with Slovakia (then Czechoslovakia) after the disintegration of the Habsburg Empire, and the Treaty of Trianon in 1920. Politically – if not legally – it is a contested border. Like Crimea until last month.

For those of us who remember the great hopes pinned on Hungary 20 years ago, the landslide re-election of Fidesz leader Viktor Orban, after all he has done in office, finishes off all illusions.

“Something has gone very wrong in Hungary,” says Charles Grant from the Centre for European Reform.

Indeed, and one of reasons is the destructive effects of EMU and the euro “convergence play” that has caused such damage in Central/Eastern Europe over the last fifteen years.

In Hungary’s case it led to a flood of cheap capital into the country, a fiscal bubble and an erosion of competitiveness. It also led to a rush into the euro and Swiss franc mortgages, and business debt, which blew up once the bubble burst and the Forint crashed.

This has since been followed by EU-IMF rescues, austerity packages, and years of quasi-slump, all made worse by the rolling disaster of the broader EMU debt-deflation crisis.

Variants of this have occurred across much of Eastern Europe, a region that is barely growing even though its per capita income is half or even a third of the EU average. This defies gravity. Such a bad performance can occur only if the policy structure is deformed.

Hungary is not alone. Quasi-depression has taken its toll on the post-Communist democracies and societies of several EU states. We have not yet heard the end of the story in Latvia, so often cited by the EMU evangelists as a success story even though output is still far below 2007 levels.

It is the Russian-speaking blue-collar class that bore the brunt of mass unemployment, while state policy was set to protect a middle class with foreign currency mortgages. We should not be surprised that two-thirds of Latvia’s ethnic Russians (27 percent of the population) support the annexation of Crimea. Slovakia came within a whisker of election the nationalist SMER a week ago.

I have argued many times that the whole structure of EMU and pre-EMU has held back much of the ex-Communist bloc (Poland excepted) in a low-growth trap – compared to where it should be, the relevant marker. I don’t wish to rehearse these points now.

My old friend Daniel Hannan tells me not to be too harsh on Victor Orban. The previous government was led by ex-Communists who reinvented themselves as Social Democrats, stole what they could, made an utter hash of the economy, and appointed their wives (literally) to be judges. The whole rotten system needed a purge. Fidesz has obliged.

Yet the picture is surely darkening. Pianist Andras Schiff refuses to perform in Hungary, close to becoming Europe’s anti-Semitic hotspot. “I don't even set foot in the country, not even as a private person," he told the BBC.

He is outraged by the new Horthy statue in Budapest, the celebration of a “war criminal”. He accuses Horthy of sending half a million Jews to Nazi death camps.

Mr Grant says the revanchist sweep over the weekend should shake out of our complacency. “It is quite alarming that Fidesz and Jobbik have won so much of the vote. Jobbik is a fascistic party that this scary in a way that Ukip, Le Pen, and Geert Wilders are not scary.”

Commentators have been using the term "far Right" too promiscuously to denigrate any Eurosceptic or souverainiste movement they dislike. Ukip is broadly a free-trade, Atlanticist party, fully anchored in British democracy.

It has nothing whatsoever in common with Jobbik, or Greece’s Gold Dawn, or any of the ultra-chauvinist parties jockeying for attention in eastern Europe, and not only in the east. Nor does it have anything in common with Fidesz for that matter.

Those who claim that EMU austerity policies and the boom-bust structure of monetary union (and its satellites) have done no lasting damage to Europe’s political cohesion have spoken too early.

Hungary is sui generis – like all countries – yet it is not hard to count four or five other EU states that are nearing a 1930s lurch.

We can argue about definitions but in my view Hungary is no longer a fully-functioning democracy. The EU threw the book at Austria over a decade ago when Jorg Haider’s Freedom Party joined the government as a junior coalition, and before it had done anything wrong. Yet the EU Council is almost silent now that it really does have a test on its hands.

The question for the rest of us is whether we want to be part of an EU treaty club that now includes authoritarian regimes. Just remember, any Hungarian magistrate can issue a European Arrest Warrant for any British citizen on British soil – or a French, or German citizen, on their soils – without having to mount a prima facie case or submit proper evidence. And they do exactly that.

Hungary is fast becoming the biggest single reason why we may have to leave the EU.

*Ambrose Evans-Pritchard has covered world politics and economics for 30 years, based in Europe, the US, and Latin America. He joined the Telegraph in 1991, serving as Washington correspondent and later Europe correspondent in Brussels. He is now International Business Editor in London.