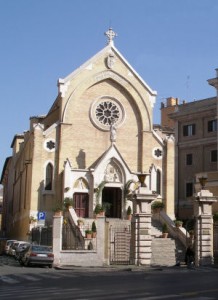 ROME--Choosing obscure Sant’Alfonso on the Esquiline Hill as titular church for Britain’s highest Catholic, Archbishop of Westminster Cardinal Vincent Nichols, came as a surprise in many quarters.

Sant’Alfonso, or, to give it its full name, Santissimo Redentore e Sant’Alfonso, is a 19thcentury edifice built in an unfashionable neo-gothic style and wedged into a corner facing on to Via Merulana, the tree-lined avenue that links the two basilicas of St. Mary Major and St. John Lateran. It is not one of the churches on normal tourist itinerary lists, although it possesses an icon much revered in Haiti, the Philippines and several Eastern European countries and has a special relationship with the resident Polish community, with a social centre and masses in Polish on Sundays.

As a former student of the English College, Cardinal Nichols is not a stranger to Rome. However, he will find additional reasons for feeling at home when he comes to visit his titular church. Despite its present-day international reach, “Our Most Holy Redeemer and St. Alphonsus” was born British. The building, in fact, was funded by a Scottish nobleman and the architect was also probably Scots (some sources claim he was English or Irish. His actual birthplace appears to be unknown).

Inaugurated in 1859, Sant’Alfonso was one of the last churches to be built while Rome was still a papal state, and it was to have a narrow escape from devastation and destruction  when Garibaldi’s troops invaded Rome in 1870. The previous church of St. Matthew that had stood on the spot had not been so lucky. It was one of thirty Rome churches that Napoleon’s army tore down in 1798. The Caetani, one of Rome’s leading aristocratic families, had built a residence on the site, which they called Palazzo Caserta, after their historic feud in Campania. However, they were not destined to enjoy it for long. The family was still paying off debts incurred by one of their forebears two centuries previously and decided to sell the property. And this is where our Scottish nobleman comes in. Edinburgh-born Edward Douglas, a wealthy Catholic convert, was kin to the Marquess of Queensberry, one of Scotland’s foremost families.

Douglas had been brought up Protestant and the story of his conversion, as recorded in the “Tablet” newspaper archives, hinges on a chance incident involving a forgotten umbrella. The seeds had been sown while he was a student at Oxford. He was one of the so-called “Oxford Group” of students who were strongly influenced by the traditionalist theories of the theologist and philosopher John Henry Newman and who were subsequently to convert to Catholicism. Douglas’ own conversion, however, took place a few years later when he came to Rome. According to the story, he forgot his umbrella in a confessional in St. Peter’s where he was attended a papal ceremony and had to knock up the Carmelite brothers in order to retrieve it. The actual conversation has not been recorded but it must have been extraordinarily illuminating, because he switched from the Anglican to the Roman faith and was subsequently ordained a priest, electing to join the Redemptorists,  a  missionary order founded near Amalfi  by St.Alphonsus Maria dè Liguori a century earlier.

Fired with religious fervor and blessed with considerable organizational talents and plenty of disposable income, Father Douglas rose fast within the Order. In 1853 he got the task of setting up a General House in Rome. The Caetani palace, on what was then the quiet and leafy Esquiline hill, exactly suited his purpose and he purchased it with his own money for 45,000 scudi. He was to remain there as rector for the next forty years.

His first task was to build a church next to the General House, dedicated to the Redemptorists’ founder. The choice of architect fell on a fellow Scot (or maybe Irishman or Englishman) George Jonas Wigley, whose only other completed architectural work seems to be the modest St. Mary’s Woolhampton at Reading, Berkshire. Wigley, in fact, had a more distinguished career as a writer and journalist. He founded the Catholic newspaper, “The Universe” and was one of the founders of the Society of Saint Vincent de Paul, a volunteer organization under the wing of the Fathers Redeemers.  Among the honours he received was a knighthood bestowed by Pope Pius IX.

Wigley designed the Redemptorist church in the preferred fashion of the Victorian age, which did not meet the taste of the Romans, accustomed to the classical and baroque. A noted critic of the period, in fact, said it was more “ostrogothic than gothic” and disparagingly dubbed it the “Troubador Style, in vogue in England”.  The Fathers Redeemers, however, were convinced the church was blessed, because workers found a gold coin bearing an effigy of the Redeemer while digging the foundations.

Sant’Alfonso was also favoured by the benevolence of the Pope Pius IX, who decided to give it the 15thcentury sacred icon of Our Lady of Perpetual Succour, which was held to have miraculous powers. It was purchased (or stolen, stories vary) in Crete by an Italian merchant and brought to Rome. On his deathbed, he instructed that it be carried to the Church of St. Matthew on Via Merulana so that it could be venerated by the faithful. During the procession, a paralytic girl regained the use of her legs and the sacred image became celebrated, attracting pilgrims from far and wide. One of the most assiduous of the devotees was the deposed Stuart monarch of Great Britain,  James III or VIII, in exile in Rome.

When the French troops invaded, the monks from the neighbouring monastery hid the icon and it was forgotten for many years. When finally it finally came to light, the Pope thought it would be appropriate to return it to its original site, now occupied by the new Redemptorist church.

The icon is Byzantine in style, with brilliant colours on a gold background. However, the artist has introduced his own personal interpretation of the standard conventional image of the Virgin and Child. The baby clasps his mother’s thumb tightly between his little hands, as if seeking protection and  reassurance, and, to add to the human touch, one of his sandals has fallen off and dangles from his foot.

The icon is revered in several countries, including Poland, the Czech Republic, Slovakia and parts of Russia. The Madonna of Perpetual Succour is also the patron saint of Haiti, where she is known as “the Virgin of the Miracle” and was evoked (alas, not too successfully) by Pope Benedict XVI during the 2010 earthquake disaster.

The intervention of the miraculous icon was more successful during the Italian Risorgimento. In 1870, when Rome fell to Garibaldi’s troops, Father Douglas put up a valiant struggle to save Villa Caserta from confiscation. He declared it was his personal property and sent his title deeds to the British Ambassador, claiming diplomatic immunity. To reinforce his point, he hoisted the Union Jack from the roof. In the end, he was saved by the new King Victor Emmanuel of Savoy, who lent an ear to his pleas - perhaps with the help of a whisper from the Miraculous Virgin. 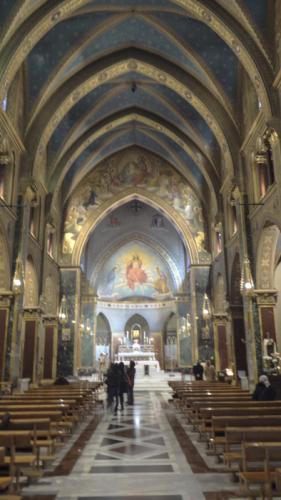