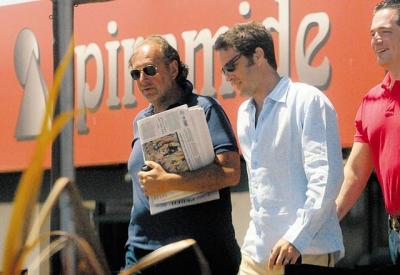 Since Senor Lubetkin left the agency last month for a cushy dlrs 25,000 a month sinecure at the UN Food and Agriculture Organisation, IPS “is conducting an external evaluation process, at the request of ‘one candidate’ to the post of DG of IPS,” a well-placed source told Italian Insider. “The process is classified, let alone its conclusions.”

The source added: “All know who the requesting candidate is, but nobody openly mentions him by name: World Bank's Sergio Jellinek of Uruguay. The evaluator, (is) Spanish consultant Luis Arroyo, chosen by Jellinek and officially approved by former DG (and Jellinek's old buddy) Mario Lubetkin. IPS is paying for half of the undisclosed fee; it has not been revealed who pays the other half.”

Senor Jellinek came second in the selection process, but he has a plus over his rivals; an unnamed "investor," who is said to be willing to put money if there is a viable project for IPS. “Everybody knows this investor can be no other but Argentina's former Interior Minister Jose Luis Manzano, who sat at an IPS Support Group meeting hosted by FAO last year,” an IPS insider added.

“This group is usually composed of institutional donors. In it, Manzano advanced some of the ideas the evaluation draft report is now recommending.”

After a series of interviews, the evaluators concluded that IPS in its current format is not only unviable but it can hardly be seen as what it claims to be. It describes it as invisible in the media and the Internet. In other words, it says that Lubetkin's leadership had lied for years about the agency's actual reach and impact, the sources claimed.

According to the sources, the report stresses that a disproportionately high chunk (over 70 percent) of the agency's budget goes to administrative costs and editorial full-time staff, against 18 percent for stringers, who produce the actual copy (no wonder IPS stringers' fees are so pisspoor). Editors' productivity, according to the report, is “appalling” -- at least 30 times less than that of news agency colleagues elsewhere.

Neither the report nor IPS top officials have come up with a detailed disclosure of IPS finances. In fact, such detailed reports have not been made available to Management since IPS Christian Democrat founder Roberto Savio left the top job in 2002. “The new DG is ostensibly supposed to take up a broken organisation without prior knowledge of its budget and accounts” one observer commented.

Evaluators propose an alternative format for IPS, which, it is made clear, would please the "investor" -- become a private company and explore other areas of work besides putting out a small news service. This new format would amount to a "refoundation" which some have warned would make IPS lose its UN status of not-for-profit international NGO (losing therefore privileges such as tax-free operations and donations).

Staffers are wondering why any investor would put money into a black hole -unless there is a chance of profit somewhere. One probable answer is, he would be buying for peanuts a 50 year-old brand with credibility among international organisations, NGOs and global civil society. Another scenario is based on Manzano's reputation in Argentina, where he has been sued for allegedly laundering some 400 million dollars.

The IPS Board is supposed to "elect" the new DG, but it has been denied the identity of candidates and will be given no choice but yes or no. The Board was not consulted at any step of the selection process. In fact, the Board hasn't met for years and most of its members seemed not to care much (no travel involved anymore) and have happily authorized Lubetkin's right hand henchman Giovanni “farmer” Spinelli to represent them.

Despite his new status as FAO corporate communications chief, Senor Lubetkin is still active at the IPS Board. It would be for the few remaining Association members to have a final say, but this looks very unlikely. Thus, the ambitious project launched 50 years ago, to shake up the unfair international information order, seems doomed to become an international outlet for a murky media mogul.

IPS used to be a place where opinions and information flew back and forth more or less freely, with its due ration of intrigues and conspiracies, but it now resembles Versailles 1789.

One veteran IPS staffer said: “Believe it or not, the Italian Insider has become THE source of information about what's going on. No wonder Lubetkin and partners are doing everything to stop you.”