The rich complain that we do not love them 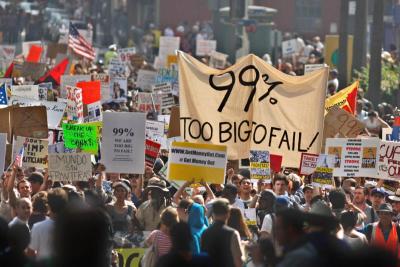 ROME- F.Scott Fitzgerald famously said “The rich are different from you or me,” yet in his days, in the early years of the 20th century, the rich were not subject to public scrutiny, and were generally an object of envy, not resentment.

Fast forward to the 21st century and the Occupy Wall Street movement, which first took to the streets in September 2011 in New York’s Wall Street financial district, on behalf of the 99 percent of Americans (who possess 60 percent of the national wealth) against the one percent that possess 40 percent, to denounce growing social inequality. The success of the movement’s popular action resonated throughout the world and so now the rich are striking back.

Tom Perkins is their leader, an 82-year-old with a net worth of 8 billion dollars. He owns a 1,600 square metre penthouse in San Francisco and has just bought a yacht worth 110 million dollars. In a letter to the Wall Street Journal in January this year, Perkins compared the “progressive war on the American one percent” of wealthiest Americans to the Holocaust, comparing the Occupy Wall Street movement’s “demonisation of the rich” to Nazi Germany’s anti-Semitism.

So, the rich really are different from you and me, and they are growing so much that it would be a pity not to join them.

A month later, Perkins publicly stated that in elections the number of votes a person can cast should be proportional to the amount of taxes that that person pays. And he is stirring his peers to “come out.”

Bud Konheim, CEO of luxury fashion company Nicole Miller, has done just that with his message to the 99 percent: stop complaining. “Our 99 percent are the one percent in the rest of the world! The guy that’s making, oh my God, he’s making 35,000 dollars a year! Why don’t we try that out in India or some countries we can’t even name. China, any place the guy is wealthy.”

John Mark, the former CEO of Morgan Stanley, which was rescued with public funds, is defending the extravagant salaries of corporation executives. He has just made a statement in favour of James Dimon, the CEO of JP Morgan Chase who received 20 million dollars at a time when his bank had lost several million in wrong investments in sovereign funds and paid a penalty close to 12 billion dollars for fraudulent practices.

According to financial sources, Wall Street has spent 600 million dollars in lobbies, to try to deter the action of the regulator in implementing the rules approved by the U.S. Congress for a somewhat stricter control, hoping to avoid a repetition of the financial meltdown of 2008 which, combined with the European crisis of sovereign funds, has brought unemployment to young generations everywhere.

For those who think that in reality the vote of a billionaire is equal to the vote of an unemployed person, this counterattack by the one percent is legitimate. The only problem is that, apart from their different weight in politics, I wonder if the same naïve persons would also believe that rich and poor pay taxes in the same proportion. According to Tax Justice Network (TJN), an organisation that campaigns to curb tax avoidance, fiscal paradises now hold close to eight percent of the gross world product (the U.S. has a gross domestic product close to half of that), and TJN underlines how big capital spurs corruption.

What is corruption? According to the Oxford English Dictionary, corruption is “dishonesty or fraudulent conduct by those in power.” And financial institutions and the one percent are certainly in power. According to TJN, the amount embezzled over the last 15 years is a staggering 30 trillion dollars, or half of the world’s annual gross product. In China, four trillion is thought to have disappeared between 2000 and 2011, much of it funnelled to fiscal paradises. In Russia, the figure is around one trillion and in the European Union 1.2 trillion.

All over the world, banks have been fined at unprecedented levels for fraud and corruption. Reading the U.S. Senate report (2009) on the level of corruption in UBS, Switzerland’s largest bank, is like entering the world of crime novels. The 176-page report details the extent UBS went to in helping U.S.clients hide billions in assets.

Anyhow, there is no need for the one percent to be concerned. In spite of their complaints, they are doing better than ever. Just read this year’s Wealth Report, the annual compendium of all things rich from Knight Frank, the property management firm. Over the past decade, the super-rich have swelled by 59 percent, and billionaires by 80 percent: they now stand at 1,682. Those with assets of more than 30 million dollars number around 167,000, equivalent to the population of a sizable town. In a recent poll, 75 percent of the famous 0.1 percent said that they increased their wealth in the last year.

By 2030, Chinais expected to have 322 billionaires, more than Britain, Russia, France and Switzerland combined: finally proof that socialism, albeit in its Chinese version, is superior to capitalism. Sovereign countries take note. Maltais proposing to offer its passport to those who give
650,000 euros, with no residency requirement. Maltais part of the European Union, so with its passport you can go everywhere. Spain and Portugal are offering residency, even with limited time, in their country if you make substantial investments, and Latvia and Estonia are now following. The U.S. gave 7,641 investors an immigrant visa in 2012, and 80 percent of these went to Chinese investors.

So, the rich really are different from you and me, and they are growing so much that it would be a pity not to join them. The market is now the basis for democracy: anybody can make it, it’s just a lack of will if we’re still part of the 99 percent!