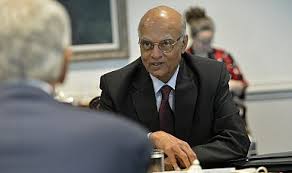 NEW DELHI--Ideally, the next government in New Delhi ought not to have to make hard choices early on in its honeymoon period. But a rapidly changing global order may make it imperative that a new prime minister will not have the luxury of putting difficult and challenging foreign policy decisions on the back-burner.

Ukraine’s president, Viktor Yanukovich, fled Kievon February 22, the day on which his detractors illegally assumed power. For 12 days after the regime change, the United Progressive Alliance government behaved ostrich-style, its head buried deep in the sand in the expectation that the crisis in Kievwould just go away. The ministry of external affairs explained away its silence with the excuse that “Indiahas been closely following the recent events in Ukraine.” However, it is to the credit of the UPA that when Shivshankar Menon, the national security adviser, spoke nearly a fortnight after Ukraine shook up relations between Russia and the United States of America on the one hand, and between Russia and Europe on the other, he was characteristically unambiguous and enunciated New Delhi’s position in terms that Moscow could expect from a friend of long standing like India.

The next government will have to build on India’s Ukrainian cards that Menon has laid on South Block’s diplomatic table. But its challenge will be to go beyond mere words and craft a strategy that will serve India’s interests, taking into account the forces that events in Kiev, since demonstrations there from November 21, have unleashed.

Fundamental to any such strategy is a frank and wholesome acknowledgement that, for the remainder of Barack Obama’s presidential term, it will not be business as usual between the White House and the Kremlin. This realization will have to be incorporated into dealings with Washington, which a new government will have to craft and refashion as a priority once it assumes power at the end of May.

Towards this effort, South Block must call up its cold warriors, who have been in cold storage during the long love-fest between New Delhiand Washington. These are men and women in the Indian Foreign Service who did well by their country during the decades of the Cold War, men and
women who can contribute to the otherwise pathetic institutional memories needed for making policy on Raisina Hill, the seat of power in the capital.

It is reasonable to assume that if Narendra Modi becomes prime minister (or even if another leader from the Bharatiya Janata Party becomes head of the next government) the country will face a terrorist attack within months, if not weeks. It is in the nature of the cross-border threats that confront Indiathat such an attack will be designed as a message to the new government. The severity or otherwise of such an attack will depend on what is on the minds of those in the Inter-Services Intelligence in Rawalpindi who are tasked with that operation, even if it is launched by terror groups whose connection with the ISI may appear to be tenuous, so that the military intelligence outfit can escape blame for any direct involvement that may otherwise complicate Pakistan’s engagement with the new set up on Raisina Hill.

With events in Ukrainepotentially changing equations in Asia(and South Asia, in particular) India should not expect any support from Washingtonbeyond the usual wordy condemnation of terrorism in such a scenario. In any case, New Delhi’s experience with the notorious terrorist facilitators, David Headley and Tahawwur Rana, ought to be a constant reminder to the next government that even at the best phase of Indo-US relations intelligence cooperation from Washington, which could have prevented some of the worst cross- border terrorist carnage in India, was found wanting.

A revival of the Cold War mentality in Washington(which is in answer to the prayers of America’s military-industrial complex, what with wars in Iraqand Afghanistanwinding down) also means, for India, a return to the geopolitical equations of the 1960s and 1970s with regard to its neighbourhood.

From India’s point of view, the most significant development since the overthrow of Yanukovich has not been the United Nations security council meetings, the European Union parleys or the military moves to threaten Russia. It has been Monday’s long telephone conversation between the Chinese and USpresidents, Xi Jinping and Obama.

Beijing’s leadership is at its best in spotting opportunities for preserving and advancing their core national interests. In the Ukrainecrisis, they have sensed an opportunity to influence the course of the global order with relevance to their country. Since the Americans cannot take on Russiaand Chinaat the same time, Beijing’s leadership recognizes that, by making the right moves with the Americans, they can manipulate Obama into making concessions on his Asian “pivot” and other issues of concern in Beijing.

It will not be lost on Vladimir Putin, the Russian president, that Chinadid not go as far as Indiadid in acknowledging “legitimate” Russian interests in Ukraine. The Chinese are willing to give the benefit of doubt to the new forces in power in Kiev. All that is missing from this diplomatic scenario are Pakistani gyrations.

For Indians, there is a sense of déjà vu in all this. In 1971, under similar circumstances, the Pakistanis secretly facilitated Henry Kissinger’s travel to Beijing, which eventually led to the historic visit of the president, Richard Nixon, to Beijingand China’s rehabilitation in the world. This time round, the Chinese may well become the bridge between the USand Russia, and eventually have a role in resolving the crisis over Ukraine.

Any collaboration between Washingtonand Beijingover Ukrainewill have an inevitable fallout in Central Asia, too, where Beijinghas assiduously developed good assets over the years. After the P.V. Narasimha Rao years, when Indiawas among the first countries to open embassies in the
Central Asian republics, New Delhifaltered, yielding ground to Pakistanis.

One result of a revival of the Cold War from Ukraineis that Central Asian governments may be forced to choose between the West and Moscow. Indiatoo will then have to adjust its approach to Central Asiawith an inevitable spillover of such adjustments on Afghanistan. Several years ago, Indiaopened its first overseas air base in Tajikistan: the base is still Indian, but the aircraft stationed at the base is now entirely Russian. A fresh, creative look at such assets in its extended neighbourhood will have to be part of reassessments by a new government in New Delhi.

Finally, the secrets tumbling out of Ukraine, such as revelations about how regime change was orchestrated in Washingtonought to make Indians sit up. It is not inconceivable that tactics such as those used in Kievcould be used by disaffected elements in restive parts of India: Kashmir, volatile areas of the Northeast. The possibilities are wide and fearfully large, and the potential for outside support for these immense. Where will Indiaturn to in upgrading its intelligence capabilities to cope with such new challenges? Here again, a return to Cold War preferences offers an answer, all of which demands a comprehensive look at not only foreign policy but also strategic priorities. It will not be easy after a decade of complacence and false comfort that has been shattered by the events in Ukraine, and a sudden revival of the Cold War.

*K.P. Nayar - The Telegraph, India, distributed by Other News