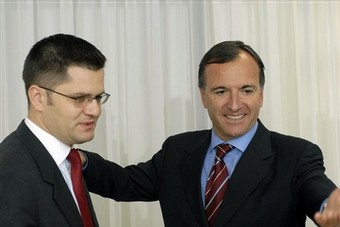 ROME — Prominent members of the Serbian community in Italy marked 130 years of diplomatic relations between Belgrade and Rome Friday at a glittering reception in the Serb Embassy residence in  fashionable Monti Parioli. The party may be one of the last Serbian Ambassador Sanda Raskovic-Ivic plays hostess to in the imposing building which likely will pass to Slovenia or Croatia under agreements to divide up property belonging to the former Yugoslavia, diplomatic sources say.

The Serbian Foreign Minister, Vuk Jeremic, in Rome for an official visit, joined the Ambassador in welcoming guests.

Mr Jeremic had meetings with Italian ministers before leaving for Brussels for crucial negotiations on Belgrade’s candidature for membership of the European Union.

The historic embassy residence building perched on the panoramic Via dei Monti Parioli was originally given to the Croatian Pavolic regime by Mussolini and became the Yugoslav Embassy residence after the Second World War.