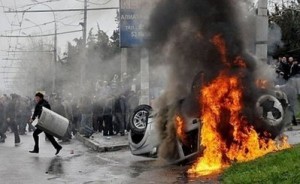 ROME — Anger over corruption and nepotism in the government of President Kurmanbek Bakiev contributed to the violent unrest that broke out in the central Asian republic of Kyrgyzstan earlier this month. A key figure in money-laundering allegations involving Italian telecom companies Fastweb and Telecom Italia is a well-connected U.S. citizen who is reportedly a business partner of the president’s son, Maxim Bakiev.Rome Judge Aldo Morgigni issued an arrest warrant last month for Eugene Gourevitch, believed to have been born in the Soviet Republic of Kyrgyzstan and who has reportedly held a U.S. passport since 1990, for alleged involvement in a fraud that is said to have siphoned an astonishing dlrs 2.7 billion from the wholesale telephony divisions of Telecom Italia SpA and Fastweb SpA between 2003 and 2006.

Charging Gourevitch with criminal conspiracy and money laundering, Judge Morgigni alleged the U.S. citizen had “created, managed and used … a series of companies through which he moved an enormous quantity of money constituting the ‘cuts’ destined for the various members of the conspiracy”.

Reportedly aged 33 and with an address in Long Island City, New York, Gourevitch is said to have helped to open accounts at a bank in Vienna to launder money from two companies allegedly involved in the fraud, Planetarium Srl and Global Phone Network Srl.

Gourevitch had been used by his criminal associates over a significant period of time “because of his connections in Switzerland and other states, because of his status as an expert in company organization and international money laundering,” Morgigni wrote.

An online curriculum says “Gourevitch is an American entrepreneur with over 10 years experience in investment banking and management consulting.” He was president of Virage Consulting Ltd, a U.S. based management consultancy between 2001 and 2007, and a director of Asian Universal Bank (AUB), a commercial bank based in the Kyrgyz Republic, between 2006 and 2009. Other managerial roles included senior vice-president of Investment Bank of Africa, CEO of a New York hedge fund, Gamma Square Partners, and director of GSN Tech LLC, described as an “offshore software development” company.

In a Twitter posting sent on January 19, Gourevitch responded to allegations of money laundering at the Asian Universal Bank under the heading: “Some undeserved answers for Argodan.” The allegations had been refuted after a thorough audit by the National Bank of the Kyrgyz Republic and the international detective agency Kroll Associates, he claimed.

The accusations lost all credibility when one considered that “well-known and ethically spotless people” such as former U.S. senators Bob Dole and John Bennett Johnston had accepted seats on the AUB board, Gourevitch wrote in his reply. Gourevitch is listed as contributing dlrs 4,600 for the unsuccessful re-election campaign of Dole’s wife, Elizabeth, in 2008.

Writing as CEO of MGN Group, an international investment bank based in the Kyrgyz Republic, Gourevitch acknowledged that the country needed to improve corporate governance and transparency. “We have an educational role,” he wrote in an article published in a special advertising section of BusinessWeek magazine.

A 2008 article in The Times of Central Asia pointed out MGN’s role as advisor to a consortium that participated in the privatization of Kyrgyzstan’s national telecom operator Kyrgyztelecom and praised the bank for its “comprehensive AML (Anti-Money Laundering) Program”.

According to the Turin daily La Stampa, the Bank of Italy was alerted by the Central Bank of Cyprus to allegations that two of Gourevitch’s companies, Wolstin Ltd and Crown Era Investments Ltd, had been “used to launder money derived from carousel frauds and the smuggling of tobacco and drugs, perpetrated presumably in Italy and the United Kingdom”.

Reports on the scandal emanating from Italy appear to have fueled anger against the Bakiev regime. “The few independent media in Bishkek (the Kyrgyz capital) that carried reports from Italy have been closed down,” La Stampa reported last week.

Police reportedly succeeded in penetrating the activities of Gourevitch and his associates after intercepting a package posted by him at Milan airport and addressed to a company in Rome. The package contained 10 English mobile phone SIM cards that the alleged conspirators believed could not be intercepted by Italian police, according to a report published by the weekly magazine Panorama. The investigators noted the numbers of the cards, six for Vodafone and four for Orange, and then resealed the envelope and sent them on their way.

Perhaps the most colourful of Gourevitch’s alleged associates, among the 55 others for whom Judge Morgigni issued arrest warrants, is Gennaro Mokbel, the son of an Egyptian military officer and Italian mother. Mokbel is alleged to have used contacts in the Calabrian mafia, the ‘ndrangheta, to get a friend fraudulently elected to the Senate.

With alleged connections to right-wing extremists, including two terrorists convicted for the 1980 bombing of Bologna railway station, and allegedly protected by corrupt officers in the finance police, Mokbel reportedly invested some of his illegal profits in African diamonds and works of art by major modern Italian artists. His collection reportedly included photographs and memorabilia of Benito Mussolini and Adolph Hitler.

Italian newspapers allege the group may have enjoyed friendly relations with secret service officers, as well as with police and politicians. A British suspect, Paul Anthony O’Connor, was frequently “accompanied by a former agent of Britain’s MI6 (foreign intelligence agency)”, according to Panorama.

And a telephone intercept published by the Rome daily La Repubblica purported to indicate that Mokbel was attempting to organize a dinner “with the head of MI5″, Britain’s domestic intelligence service.

Mokbel and his associates obtained access to sophisticated espionage software when they acquired control of Ikon Srl, a software company based near Milan, the Rome daily Il Messaggero claimed. The company owned spyware developed by Fabio Ghioni, a hacker who worked for the IT security department of Telecom Italia, that had been used by police and secret services to track terrorists. “That software was used in investigations into the new Red Brigades (Italian Marxist terrorists), Islamic cells and to combat child pornography,” Ghioni told Il Messaggero. The idea that it had fallen into unscrupulous hands was “decidedly alarming”, Ghioni said.

Confident that his phone calls couldn’t be intercepted, Mokbel appears to have spoken freely over the phone. In one angry call to “his” senator, Nicola Di Girolamo, he allegedly exploded: “You can become president of Italy, but for me you will always be a doorman, meaning you are my slave.” The newly elected senator is alleged to have replied meekly: “Please forgive me.”

In another candid call, published by the weekly L’Espresso, Mokbel sighed: “Three years in prison would be just a bit of rest for me.” He may now have the opportunity to put his boast to the test.