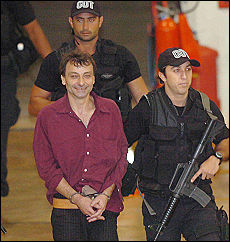 ROME —The row over Brazil’s refusal to extradite convicted Italian murderer Cesare Battisti showed little sign of diminishing Tuesday as it entered its second week, with politicians of all political hues denouncing the decision as an insult to Italian society.

Brazilian Justice Minister Tarso Genro announced on January 13 that Brazil would not be extraditing Cesare Battisti, a former member of Armed Proletarians for Communism(PAC) who became a successful crime novelist while living on the run in Paris, to serve a life sentence for the assassination of four people.The Brazilian authorities turned down Italy’s request on the grounds that Battisti had been convicted in his absence and on the basis of allegedly unreliable supergrass evidence.Many Italians were infuriated by Brazilian suggestions that Battisti was a victim of political persecution and that his life might be at risk if he were returned to his homeland.Mr Genro’s declaration in a newspaper interview that he was looking into the fate of the apparatuses of illegal repression linked to the CIA and the Mafia which were active at the time of Battisti’s crimes was seen as particularly offensive.“I need this information because, if these organizations still exist, then Battisti could be at risk,” Mr Genro told Estado de Sao Paulo.Mr Genro explained his decision further on Monday, saying Battisti was guilty ofpolitical crimes and had already benefited from 11 years of asylum in France. Brazil had a long tradition of granting political asylum to individuals from both the right and the left, he told the daily Folha de Sao Paolo.Italian President Giorgio Napolitano has written to Brazilian President Luiz Inacio Lula da Silva to express his “surprise and regret” at the decision and Gianfranco Fini, the speaker of the Chamber of Deputies, protested to his Brazilian counterpart that the suggestion Battisti might suffer political persecution in Italy was “frankly unacceptable for a profoundly democratic country with a great juridical tradition”.The revolutionary-turned-writer has been convicted of direct participation in the murder of a prison guard and a police officer and of complicity in two other murders – of a butcher and a jeweler. The killings all came in the late 1970s, when Italy was in the grips of its terrorist “years of lead”.Indignant Italian MPs have called on their countrymen to boycott Brazil as a holiday destination, on the government to exclude Brazil from international summit meetings and on Serie A’s Brazilian soccer stars to appeal to their president to overturn the ruling.“It’s unacceptable to treat Italy as a country where human rights are not respected and prisoners are tortured. Battisti is a terrorist, not a political prisoner,” Italian Foreign Minister Franco Frattini said in a TV interview.“They were bandits who shot people in the back and in the back of the head, just likeMafiosi,” Francesco Merlo wrote of Battisti and his PAC associates in an article for the Rome daily La Repubblica.“And they belong not to the political history but to the criminology of a country that tried them while respecting their rights and with a judicial generosity that Brazil can only dream of,” Merlo added, in a furious comment on the row.Italians were surprised to learn that Battisti’s lawyers had been helped in their campaign by a letter from Francesco Cossiga, in which the hardline interior minister of the 1970s confirmed that Battisti’s crimes were indeed political in nature.Interviewed by the Corriere della Sera on Thursday, Cossiga denied being embarrassed. “I didn’t and do not say that Battisti is a victim of political persecution but that his crimes are political,” Cossiga explained.The episode has revived tensions between Italy and France, where Battisti lived as a beneficiary of the “Mitterrand doctrine”, which granted asylum to leftwing terrorists who agreed to renounce violence.In recent years rightwing governments have dismantled President Francois Mitterrand’s asylum policy and French justice authorities had agreed to extradite Battisti in 2005, after a protracted legal battle in which the former revolutionary enjoyed the support of many of France’s leading leftwing intellectuals.More recently President Nicolas Sarkozy caused irritation in Italy by stopping the extradition of Marina Petrella, a former Red Brigades terrorist who developed anorexia while in prison.He was reportedly influenced in that instance by his Italian wife, the former model and pop singer Carla Bruni. And there have been suggestions that Sarkozy and his wife may have intervened again to thwart the Italians.Battisti’s French lawyer, Eric Turcon, told the French magazine L’Express last week that Sarkozy had agreed to meet Fred Vargas, a crime novelist and leading Battisti campaigner, at the request of Ms Bruni, and had then interceded with Brazilian justice officials to grant Ms Vargas a hearing.The millionaire French crime writer has campaigned tirelessly on Battisti’s behalf, reportedly paying his legal costs and for his family to visit him in Brazil. French police reportedly succeeded in locating him while he was on the run in Brazil by intercepting one of his phone calls to Vargas’ Paris home.Battisti has consistently painted himself as a political prisoner who risked extradition to a fascist-run country, likening his position to that of illustrious Brazilians who had once struggled against dictatorship.He has even claimed that he risked being kidnapped by the parallel security organs of the Italian state – a reference to the shadowy Department of Antiterrorism Strategic Studies (DSSA), a private security company whose founders said they used to work for the secret NATO stay-behind organisation known as Gladio.Brazil’s response contrasts sharply with that of the United Kingdom, which in June 2007 extradited Enrico Mariotti to begin a 26-year sentence for the kidnap and murder of a Roman duke.The crime took place at about the same time as Battisti’s murders. Like Battisti, Mariotti was tried in his absence, convicted on supergrass evidence and insists he is innocent.Many critics of the Brazilian decision attribute it to ideological and personal ties rather than to purely legal considerations.Even Maurice Bignami, a former member of the leftwing group Front Line, said he couldn’t picture Battisti as a victim of persecution.“We ex-terrorists have been lucky,” he told Il Giornale. “We killed, but we had fair trials, light sentences, and we’re almost all out of prison, living normally. What more could we ask for?”