Archbishop of Westminster to be made Cardinal by Pope Francis 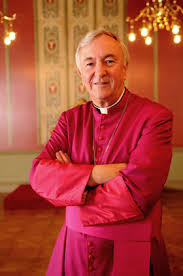 VATICAN CITY -- An official British delegation has arrived to see Vincent Nichols, the Archbishop of Westminster, receive a red cardinal’s hat from Pope Francis Saturday, the UK Embassy to the Holy See said.

The leader of Roman Catholic Church in England and Wales will be elevated to the dignity of Cardinal at the Consistory of Cardinals. The ceremony is to be attended by an official delegation sent by the British Government, including the Rt Hon Lord Patten of Barnes and Baroness Stowell of Beeston MBE, Parliamentary Under-Secretary of State for Communities and Local Government, accompanied by the British Ambassador to the Holy See, Nigel Baker.

Rev Nichols is among the first 19 candidates chosen by the Argentinian pontiff to join the highest rank of Catholic clergy since his election in March last year. This nomination comes five years after Rev Nichols's succession as the 11thleader of Roman Catholic Church in the UK following Cardinal Cormac Murphy-O’Connor’s retirement.

He will be among the 16 new cardinals eligible to take part in the next Conclave.