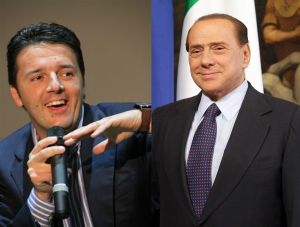 Matteo Renzi, 39, is expected to replace a fellow member of the Democratic Party as interim prime minister of Italy. Former PM Silvio Berlusconi, 77, has voiced invaluable support of Renzi’s policies.

ROME -- Italian Democratic Party secretary Matteo Renzi is well on his way to stardom. Earlier this year, he won his party’s primaries with a landslide victory, receiving nearly 70 percent of votes. The ex-mayor of Florence is widely expected to become the next prime minister of Italy, especially in light of the recent resignation of Enrico Letta, interim prime minister and a fellow member of the Partito Democratico (PD).

Simply by climbing up his party’s ranks at the tender age of 39, Renzi has already made a name amongst Italy’s throng of osteoporotic politicians. His charisma and enthusiasm have allowed him to openly criticize his own party and attack the system of vested interests that has made Italy the least competitive country in Europe. Regardless of his popularity, Renzi’s latest initiative is risqué even for his standards: in attempting to manipulate Italy’s infamous parliamentary system, he has teamed up with Italy’s most infamous public figure. This figure is none other than Silvio Berlusconi, the humiliated ex-prime minister of Italy. Renzi’s choice in a new political partner will make or break his chance to fix the floundering Italian state.

Renzi’s rise to power comes at a precarious time for Italy, largely caused by the inaction of his predecessors. He must resolve the general downward slump that Italy has suffered in the new millennium, characterized by so-called “industrial desertification,” as well as falling competitiveness and a chronic lack of foreign investment. More immediate problems, such as a 41.6 percent youth unemployment rate, embarrassing diplomatic crises and the fracturing of several major political groups all demand some sort of resolution. Whoever will rule Italy next will have inherited these issues from media tycoon-turned-prime minister Silvio Berlusconi, who largely failed to cleanse Italy of its bloated bureaucracy and business-alienating policies. Instead, he is accused of making adverse political decisions sometimes solely to benefit his media empire. Renzi, though, has chosen none other than this divisive figure to help spearhead his initiative for parliamentary reform. By crossing party lines in this way, Renzi may not only fix the system that has bred political instability but also a long tradition of inter-party gridlock.

The reforms that Renzi and Berlusconi are proposing to the Italian parliamentary system are not exactly revolutionary. They are largely borrowed from successful British and Spanish models, which have by and large favored larger parties and prevented dozens of smaller parties from presenting outsize influence on the ruling coalition. The party with the most votes would take home a “winner’s prize,” bestowing upon any single party an extra 15 percent of parliamentary seats. Any individual party would not be able to enter the parliament without 8 percent of the votes, essentially pushing out the mini-parties that have so far made the creation of a ruling coalition so difficult. This policy would have probably prevented the almost-perfect tie between the two leading coalitions in the 2013 elections, in which Berlusconi’s senate coalition was made up of no fewer than twelve parties of varying sizes, the smallest of them raking in fewer than seven thousand votes. This aspect of parliamentary reform would reduce the size of coalitions, and therefore the need to please each coalition’s fringe parties.

Probably as a result, Fabrizio Cicchitto, former party head in parliament under Berlusconi and now a member of the breakoff “New Center Right” party, compared the deal to the Molotov-Ribbentrop Pact of 1939. Of course, there are few similarities between this deal and the Hitler-Stalin agreement for the division of Poland, but Cicchitto argues that in many ways the same disinterest in mediation or cooperation amongst parties is present. In the agreement, special arrangements are also made for the “regional” parties with outsize influence in northern Italy, who would otherwise not reach the requirements for parliamentary membership. A sister deal would also propose the abolition of the Italian senate, unanimously considered a superfluous organ that mimics the activities of the parliament; a no-brainer that has been tossed around for several decades.

In short, neither party has anything to lose from the reforms, nor was there any inherent need for Renzi to reach across the aisle to Berlusconi’s Center-Right party in such a monumental way. Renzi and Berlusconi’s alliance, though, promises to break the divisions usually made between party lines, paving the way for a government that can more quickly address the challenges Italy faces. Regardless, Renzi’s move fully presumes Berlusconi’s continuing influence in the Italian political scene. So far, the jury is out on how much the subdued Cavaliere’s influence will continue to steer the nation’s reforms.

Former Prime Minister Silvio Berlusconi has always preferred younger partners, but not so much in the political sense. Will his support of youthful Democratic Party Secretary Matteo Renzi herald a new age in Italian politics? Berlusconi’s political grasp fell at an unprecedented speed last year. Many influential members of his cabinet decided to break off from his party and its dwindling credentials, pushing to a disastrous splintering of the Italian right. A significant number of the apolitical voters which had made for Berlusconi’s success moved to the “Five Star Movement” party, Italy’s equivalent to the obstructionist Tea Party and currently the second most supported party in the nation. Not to mention, Berlusconi was stripped of his parliamentary seat in November last year, following a tax fraud conviction accompanied by accusations of his paying underage prostitutes and bribing witnesses. Despite these increasing signs of weakness, Berlusconi’s newly refurbished “Italy Forward” party was recently polled at around 21.5 percent of the national vote, leaving it by and large Italy’s third largest political entity. What may just seem like a measure for bipartisanship on Renzi’s part is therefore also an obvious political maneuver; guaranteeing some sort of common ground with Berlusconi’s party would leave him with unquestionable support of the Italian political process.

Although Renzi and Berlusconi tout opposite political messages, with Renzi focused on improving government services while Berlusconi is set on dismantling them to the largest extent possible, their attitudes towards Italy’s endemic issues make them natural allies. Renzi needs to break the same ground that Berlusconi did throughout his political career: to bring individuals disillusioned with the Italian political scene to the voting booth. Berlusconi’s pledge to shake up a self-assured political order with corporation-style competition and management brought him a group of followers who have yet to leave him.

A similar image is vital to Renzi, whose resounding victory in his party’s primaries was partially due to his ability to attract hordes of new members, but who threatens to get tangled in the same political acrobatics as his predecessors. Essentially, Renzi must recreate the unprecedented political enthusiasm that won Berlusconi his first victory in 1994. Therefore, many argue that Renzi and Berlusconi are at the same point in their political careers, only that Renzi is on his way up to the prime minister’s position, while Berlusconi is on his way down to irrelevance. Meeting in the middle can get Renzi the bipartisan boost he needs to win centrist voters over, while Berlusconi’s party can also maintain important support from centrist voters.

What lies next for the new Democratic Party secretary is essentially a balancing act. By creating this partnership, Renzi threatens to not only alienate his core electorate, but also to become ostracized in his own political party. Most recently, the president of Renzi’s party announced his resignation, claiming that his political differences with the secretary were too great to reconcile. Renzi will also have to calm tensions with the grassroots “Five Star Movement,” who were recently on the news for hurling largely unprecedented insults at both the Italian president and the speaker of the lower house. Continuing support from Berlusconi is one of the few things Renzi can currently bank on for maintaining stable governance.

Commenting on Renzi’s potential nomination as new interim prime minister, Berlusconi was uncharacteristically supportive of his opponent, distancing Renzi from his colleague’s roots in the now-defunct Italian Communist Party. With a distinctly more tongue-in-cheek attitude, Berlusconi also reminded the press that Italy has been without a democratically elected leader for more than two years, a state of affairs which Renzi’s appointment will only continue. In a nation increasingly skeptical of its political system, Renzi may well find that his interparty negotiations will be labeled as too similar to the undemocratic and insensitive moves of his colleagues. As the honeymoon period for Berlusconi and Renzi is overdue to come to a close, Renzi will have to step out of the embrace of his predecessor to prevent making the same political mistakes.

The article first appeared on February 16, 2014 in the Brown Political Review (Brown University)