PRODI JOINS THE PRESENTATION OF THE REPORT ON AFRICA 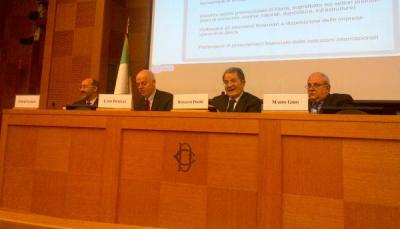 Prodi and Pistelli at the presentation of the report. Photo: ISPI

ROME -- Deputy Minister for Foreign Affairs Lapo Pistelli and the special representative of the UN Office for the Sahel, Romano Prodi, attended on 13 February the presentation of the report "The Politics of Italy in Africa" organised in Rome by ISPI and the Ministry of Foreign Affairs.

The aim was to bring together policy makers, economists, diplomats, staff of NGOs and associations active in Africa in the context of the renewed attention of our country to this continent.

The central point of the report, produced by Giovanni Carbone (University of Milan and ISPI), Gianpaolo Bruno (ICE), Gian Paolo Calchi Novati and Marta Montanini (ISPI), is the rapid and sustained economic growth in Africa and opportunities related to the strengthening of economic internationalization of Italy towards the region. The first part of the report examines the relationship between Italy and sub-Saharan Africa in the light of the deep economic and political changes that are transforming the latter, and compares it with similar relationships maintained by other countries with advanced or emerging economies. In the second part, the goal is to identify some guidelines, scenarios and tools to begin to delineate with greater coherence and incisiveness an Italian approach to sub-Saharan Africa for years to come.

Get the report at the link: