Solar energy plan to save Sahel 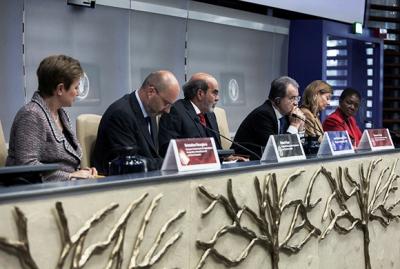 ROME --The United Nations and humanitarian partners have launched a three-year Regional Strategic Response Plan to provide aid to millions in nine countries in the Sahel region.

The plan seeks to mobilize an initial dlrs 2 billion from international donors in 2014. Some 20 million people are currently at risk of food insecurity in the Sahel and 2.5 million of them need urgent lifesaving food assistance. An estimated five million children under five years of age will suffer from malnutrition in 2014, and some 1.5 million of them will face acute malnutrition.

Violence and insecurity have forced 1.2 million people to flee their homes creating protracted internal displacement and a refugee crisis. "More people than ever are at risk in the Sahel and the scale of their needs is so great that no agency or organization can tackle it alone," said UN Emergency Relief Coordinator Valerie Amos in Rome.

"The strategic plan for the region will help us reach millions of people with vital assistance, build resilience and save lives."

The strategy comprises country plans for Burkina Faso, Cameroon, Chad, Gambia, Mali, Mauritania, Niger, Nigeria and Senegal. It emphasizes strong partnerships with Governments and development partners, a regional perspective and multi-year time frame to better address the chronic causes of the crises. Population growth in the region is outstripping a slight increase in food production in 2013 and lack of access to food is compounded by high prices in most markets.

Also present at the launch in Rome Tuesday were Romano Prodi, UN Special Envoy on the Sahel, Amir Abdulla, Deputy Executive Director and Chief Operating Officer, World Food Programme (WFP), Nancy Lindborg, Assistant Administrator for the Bureau for Democracy, Conflict and Humanitarian Assistance, USAID, and Robert Piper, Regional Humanitarian Coordinator for the Sahel. The 2013 appeal for the Sahel requested $1.7 billion and was 63 per cent funded.

“The thing that I worked on at this time, it is not an emergency, but it is the problem of development and its priorities - said Prof. Prodi interviewed during the event. " The UN Security Council has approved investments in agriculture, food and irrigation. It dealt then with infrastructure, in order to create a market large enough to be efficient, and health care, institutions and in the end, that is the real news, a great plan of decentralized energy. Finally, with the sun, electricity will be produced everywhere."

"The big problem in the Sahel is very little international funding - added Prof. Prodi, a former head of the European Commission. "It is difficult, countries are increasingly reluctant in foreign aid. In humanitarian crises, Europe matters a lot, it helps a lot, is generous, it is the largest donor in these cases. But I said and I confirm that we are 'dwarfs' because we are politically divided and as long as we are divided we will always be 'dwarfs'”.