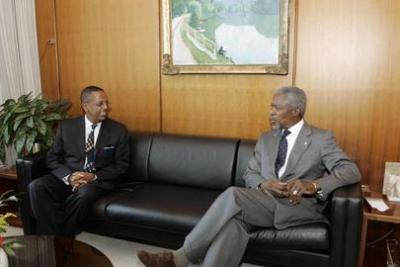 Mr Mengesha, a former Assistant Secretary General to the United Nations, has been given an office at the UN Food and Agriculture Organisation with a dubious brief to coordinate between the Rome based UN food agencies -- FAO, WFP and IFAD -- at the Milan Expo 2015 trade fair, the sources say.

“I’m enthusiastic to take this office," Mr. Mengesha was quoted telling the Expo website, "I’m sure that the collaboration with Expo Milano 2015 will allow reaching important goals.”

Mengesha until recently was a popular figure on the UN circuit in New York, where he was No. 2 man at the mysterious Department of General Assembly and Conference Management known by the guttural acronym DGACM, pronounced duh gack um.

Mengesha is the latest in a rash of senior advisors who have joined the FAO since its Brazilian director general took office, most of them on sky high salaries despite the axeing of dozens of professional staff at the hunger-fighting agency as part of budget cuts.