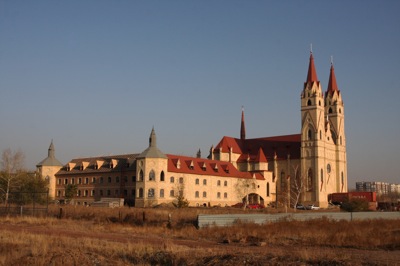 ROME — Luci sull’Est (Light on the East), an Italian association of Catholic inspiration, has announced the completion on the site of a huge former Soviet Gulag of the cathedral of Karaganda in the heart of north-eastern Kazakhistan. The association, which mainly operates in Eastern Europe and Central Asia, stresses the importance of the climaxing of the new cathedral that is designed to be a symbol of religious freedom, not only for Christianity but for religion as a whole in the region.

The cathedral underlined the importance of “reminding people of the atrocities committed in history that should not be repeated” an association spokesman, Tino Randelli, told Italian Insider. “To leave them in silence means encouraging intolerance, that’s why Luci sull’Est decided to build the church.”

The new Cathedral was erected in a historically important spot. Karaganda was the site of one the largest gulags of the Soviet Union and the Stalinist repression. The Karaganda gulag extended for more than 250 sq km and hundreds of thousands of prisoners of all backgrounds were closed within its walls, held under conditions of forced labour and often torture.

The gulag was especially designated for prisoners of the Roman Catholic faith. The Kazakhstan population at the time was a third Christian, as it is today, but native Christians were not the only one interned in the camps as hundreds of Polish, Ukrainians but also Lithuanians, Germans and Bilellorussians died on its grounds. Choosing such grounds for a church then acquires a symbolic meaning of commemoration for hundreds of unjustified victims of religious intolerance.

Although religious freedom is increasingly widespread “there are still a numerous difficulties and obstacles to surpass,” Luci sull’ Est firmly believes, Sig. Randelli says, as the recent persecution of the Coptic Christians in Egypt reminds us.

The idea of a new church came from Monsignor Jan Pavel Lenga, the former bishop of Karaganda. He started pressuring the Kazakh authorities in 2003 to obtain a permit in order to build the cathedral. The bureaucratic path was long and windy as Luci sull’Estrecalls but after many difficulties, finally in 2005 the first stone was laid in the presence of the former Vatican secretary of state, Cardinal Angelo Sodano. The result is today, for more than five years people are able to admire later a gothic inspired building, with its high and bright vaults that posits itself at the crossroad of more than 100 different cultures and peoples dedicated to the Madonna of Fatima, the famous Portuguese shrine known famous for its message of universal acceptance.

The realization of the cathedral was possible thanks to a thick network of fundraising from public and private sources for a total cost of around 200,000 thousand Euros. The movement to build the cathedral brought together people from the most different backgrounds and cultures to fight so that history will not repeat itself in Karaganda and elsewhere.