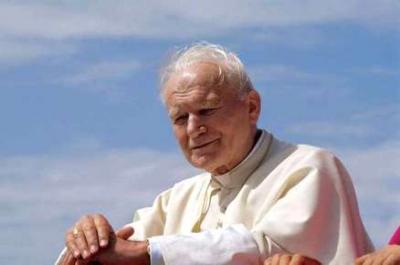 ROME- Police are hunting for thieves who stole a precious ampoule of Pope John Paul II’s blood from a shrine in the region of Abruzzo this week. Taken Saturday, with the ampoule, was only a cross, from the Church, situated at the foothill of the Gran Sasso mountain in San Pietro della Ienca, in Aquila province.

The relic of the late Polish Pope was donated tomthen church by his former personal secretary, Stanislaw Dziwisz, now the Archbishop of Krakow, as a tribute to the bond forged between Abruzzo and John Paul during his long pontificate.

The connection had been reinforced by the pope’s frequent visits to the Church and area in his lifetime, where he would go to pray, meditate and ski. The President of the Cultural Association “San Pietro della Ienca,” Pasquale Corriere who takes care of the sanctuary, said he believes it to be, “a commissioned theft.”

His daughter discovered the broken bars, and Signor Corriere adds, “who entered wanted – hypothetically – to take only the ampoule. They left everything else, also the alms.”

According to Signor Corriere there are only three relics existing with Karol Wojtyla’s blood worldwide. Investigations have begun to try and determine why a thief would steal during the night in a Church were there are no alarms, and which is often unlocked. Josè Obama, the vicar of the Church who gave the alarm on the day of the discovered thief, is also being interrogated.

The Public Prosecutor’s Office has opened an inquiry. More than 50 Carabinieri paramilitary police were deployed in the search around the area with dogs, and in close-by farmsteads. One theory in Italian newspapers is that the ampoule may have been stolen by satanist groups that have been active in Italy in recent years.