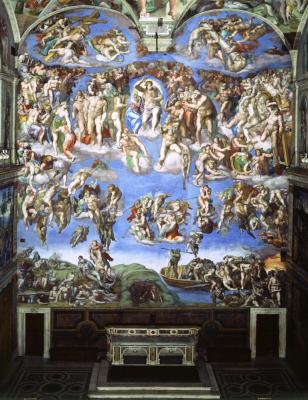 ROME-More than 5 million people visited the Vatican Museums in 2013, underlining the appeal of Pope Francis, the museums director says.

But Prof. Paolucci in a statement also said he wondered, not without concern, what will happen when the next Easter celebrations and relevant  canonizations of Popes John XXIII and John Paul II will bring to Rome immense masses of Catholics from all over the world. “Such extraordinary numbers force a vital consideration and priority. The objective will have to be from now on that of constant maintenance and preventive conservation of the Heritage”.

To this end, increasingly important resources must be allocated. Only so it could be possible to deal with such a heavy and worrying human pressure. Paolucci adds that “We will start in 2014 by securing from the climatological point of view,i.e. from the point of view of the change of air , of abating of pollutants, of control of temperature and humidity, the Sistine Chapel”.

It is a project in which Paolucci and staff are working for three years and that will be tested in May and presented to the scientific community and to the international press.

Meanwhile, the light manufacturer Osram is equipping the Sistine Chapel with a new type of LED solution. After 500 years, the outstanding historical works of art can now be viewed to a level of precision unique until now, and the specially designed art-conserving installation enables significantly higher levels of illumination. In addition, 60 percent less power is consumed compared to the existing lighting installation. "Art presents the most demanding requirements on light. Following the globally unique lighting solution in the Lenbachhaus Museum in Munich, the world-renowned frescoes in the Sistine Chapel are now being subjected to the same extremely high lighting specifications, once again underlining the authority of Osram as an integrated lighting expert operating in accordance with maximum specifications," stated Peter Laier, Osram’s Chief Technology Officer and executive board member responsible for the company’s general lighting business.

Around 7,000 LEDs will homogeneously illuminate the Sistine Chapel from this year onwards, enabling the world-famous works of art to be shown to greatest effect. The color spectrum was custom-adapted on a scientific basis and with high precision to the color pigments of the paintings, for example to the pigments in the Michelangelo’s frescoes. The highly precise guiding of light ensures that the art is uniformly illuminated, and without glare for visitors. The luminaries are to be installed away from view below the windows to make sure that light is emitted in the same direction as the natural daylight. Until now, the art could only be seen insufficiently and according to the ingress of daylight, and limited by technological and conservational constraints.

The conservational aspect, meaning protection of the art works, played an especially important role during the planning of the project, and the new LED solution is significantly gentler and more caring than all alternative artificial forms of light. Illuminance of approximately 50 to 100 lux (previously 5 to 10 lux) ensures that the art can be clearly discerned, but with as little ageing as possible.

In addition to the quality of the lighting, the new solution is also significantly more economical than the previous system. Although the level of luminance could be increased many times over, power consumption for the lighting in the Sistine Chapel is expected to be reduced by more than person. The reason for this is not only the implementation of energy-saving LEDs but also the highly exact light planning that illuminates the chapel with high precision and completely without light spill.

This pilot project, with the working title of LED4Art, is subsidized by the European Subsidy Program for Information and Communication Technology within the Framework Program on Competitiveness and Innovation (PSP-CIP). The aim of the subsidy program is to demonstrate new possibilities for LED technology with regard to energy efficiency and improved quality of light, and thus to achieve more rapid market penetration for the new technology.

In addition to the project coordinator Osram, other partners involved are the University of Pannonia in Hungary, the Institut de Recerca en Energia de Catalunya inSpain and the planning offices of Faber Technica inItaly. 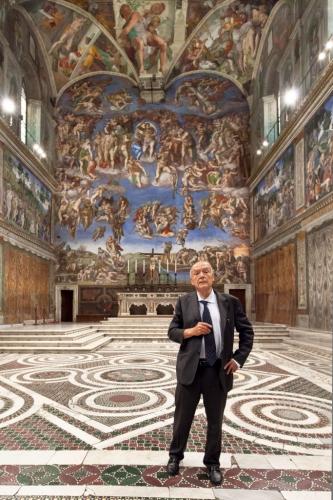