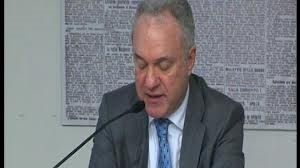 ROME– Colleagues of Mario Lubetkin have launched a “witch hunt” to find the source of leaks about his alleged fast-track hire to head the FAO communications division, IPS sources say.

“They are desperately looking for culprits and spreading fear, blaming leaks for any further staff reductions,” a source at the Inter Press Service told Insider, asking not to be named. “There are warnings of smear campaigns from former staffers who are resentful, revenge-thirsty ‘traitors,’ jealous of Lubetkin's success,” the source added-

“They have also added a political touch to it: criticism to Graziano and IPS is fuelled by right-wing quarters. Actually, all this seeks to divert attention from the 250-grand FAO contract and the irregular apointment of Lubetkin.”

Italian Insider disclosed earlier this month that Senor Lubetkin has signed a contract with FAO to become its dlrs 300,000 p.a. Communications Division director, even though he evidently bypassed FAO’s normal lengthy interviewing procedure other candidates had to go through.

Italian Insider also disclosed that the Italian Foreign Ministry is funnelling dlrs 250,000 to IPS via FAO so that IPS can write 10 articles about the Expo Milano 2015 fair in an unusual example of apparent “cheque book journalism.”

FAO watchers say Senor Luboten and his entourage may be concerned that his appointment to FAO, which has not yet been formally announced, could be put on hold if donors express concern about the failure to follow normal competition procedures for the high profile job.

FAO DG Jose Graziano da Silva earlier this year spiked plans to hire a samba-dancing executive from the ILO, Telma Viale, as FAO Human Resources chief after Insider disclosed she had made a You-tube video in which she stripped to the buff. Senor Lubetkin has not shown such flamboyant tendencies, but observers have questioned his lack of higher education and his description of himself as an "academician."

Concern among observers over the FAO’s preparations for Expo Milano also have been fuelled by the appointment of Clara Velez Fraga as coordinator of FAO’s involvement in the trade fair. During interviews for that position a well-qualified Italian female candidate was rejected on the ground that her command of Spanish was inadequate, an explanation that would be sure to irritate the Italian Foreign Ministry if the Farnesina were informed.