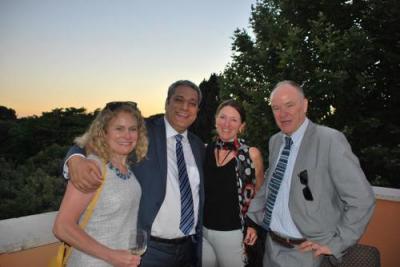 Aswani Muthoo failed to get the Evaluation job, which was awarded to Masahiro Igarashi of Japan. Aswani has returned to his position as acting director of evaluation at IFAD, the Food and Agriculture Organisation's equally troubled sister UN agency, the sources said. Aswani had been suspended for two months from his position at IFAD following one of a constellation of sexual harrasment charges being levelled at managers at the agency, reputedly as part of Nigerian Director General Kanayo Nwanze's ongoing efforts to reserve all top positions for Africans. Many of such charges prove to be groundless.

As what some FAO watchers see as a "consolation prize" for the debacle over Aswani's failed candidature, Rakesh's Canadian companion Jane O'Farell just received a meteoric promotion to a P2 grade job from a humble G-5 position though she was reportedly the "least qualified candidate" for the job and "can barely string a sentence together," the sources said.

Meanwhile staff associations continue to fight the abolitions of scores of posts under way to save dlrs 37 million on the FAO budget as required by Conference Resolution 7/2013 of June. So far more than 100 posts have been abolished and some 50 people in them have been re-deployed.

Some 14 professionals are still seeking redeployment meaning an anxious period with Christmas approaching and uncertainty as to whether they and their families have a future.

Most unpopular among Dr Graziano's constellation of advisors are perhaps Antonio Tavares, the FAO's Portuguese Legal Counsel, and Louis Cagnon, the French Canadian former legal counsel who is now Director of Conference, Council and Protocol affairs.

Dubbed the “diabolical duo” by staffers, they are seen as responsible for much of the deterioration in staff-management relations by virtue of offering dubious advice to the Director General over his scope for action, particularly by providing justifications for unilaterally imposed actions such as the abolition of the Reduction in Force Mechanism allowing the dismissal of staff members at will, the sources say.

Also on the agenda evidently is a plan by management to abolish the PSSC watchdog body on hiring, meaning that the Latin American ruling clique at the agency can hire who they want, when they want in a move that would be a further step away from meritocracy and transparency, institutionalising still further the practise of blatant nepotism under way since Dr Graziano took office last year.