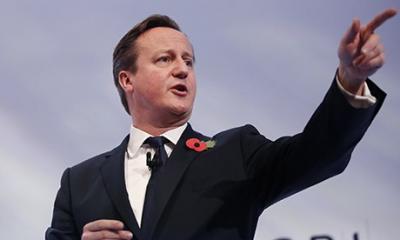 UK Prime Minister David Cameron
ROME - British Prime Minister David Cameron has written a formal letter to European Commissioner Viviane Reding, urging her to resolve Italy's illegal discrimination against foreign lecturers. The prime minister intervened in the long-running dispute as the lecturers' union ALLSI prepared to attend a crucial hearing with the European Parliament Petitions Committee.
ALLSI has been battling Italy's Gelmini law, which is widely considered to be illegal under European law, since it was passed in 2010. The controversial law downgraded the status of foreign professors in Italy to language technicians, cutting salaries by as much as 60 percent. The lecturers' union recently filed a formal complaint with the European Commission seeking a ruling on the discriminatory law, however the European Commission struck down the complaint, claiming that it lacked "uncontested evidence."
The decision, which expressed the Commission's intent to close the case while also granting ALLSI four weeks to provide additional information, outraged foreign lecturers across Italy. British Prime Minister David Cameron even sent a personal letter to Viviane Reding, the EU Commissioner for Justice, Fundamental Rights, and Citizenship, urging her to resolve Italy's discriminatory law, according to a statement by Cameron constituent Christopher Burchett, who confirmed that the letter was sent but would not disclose its contents. Other legal experts across the UK have also condemned the Commission's decision.
"The Commission is the supposed guardian of EU law, closing the file would signal to Italy and all other Member States that persistent disregard of basic EU rules will at the end of the day be condoned rather than challenged," said Noreen Burrows, Professor Emeritus of European Law at the University of Glasgow who also serves as an ad personam Jean Monnet Chair in European Law.
Peter Ferguson QC, a senior Counsel at the Scottish Bar, has warned that "if other Member States follow Italy's example, the European project and more importantly, the rule of law are endangered." Furthermore Brad K Blitz, Professor of International Politics and Deputy Dean of Middlesex University Law School, has argued that the Commission "has an obligation to investigate this matter."
ALLSI appealed the decision on Oct. 2 and sent a letter directly to Commissioner Reding. The appeal to the Commissioner called the Gelmini law the "clearest mass systematic breach of free movement of workers in the history of the EU" and sought her "robust intervention" in resolving the issue.
However, Commissioner Reding responded that the matter does not fall within her department and instead forwarded the appeal to László Andor, the Commissioner for Employment, Social Affairs and Inclusion.
The appeal has now been extended to Nov. 13 and ALLSI Chairman David Petrie will appear in a hearing before the European Parliament Petitions Committee in Brussels on Nov. 25 in order to contest before the body the ramifications of Italy's illegal law.
jp-ag
Embassy Row
World
Italy

Our heartfelt thanks to Mr Cameron, even though his letter would seem to have been sent to the wrong Commissioner. Perhaps, he might drop a line to Mr Hollande, Ms Merkel and Mr Rajoy - the languages of whose countries are the most widely taught in Italy, after English - urging them to do the same (to the right Commissioner!). Why haven’t any of these countries ever intervened as forcefully as the UK always has to uphold one of the central tenets of the EU – parity of treatment and freedom of movement for workers within the EU. This is what the Lettori issue boils down to, and the Lettori aren’t only British subjects.The first ruling from the European Court of Justice, which established the principles of law for Lettori, came out in May 1989 – nearly a quarter of a century ago. In all, Italy has been brought in front of the ECJ SIX times on this SAME issue. Our hopes were that the seventh time would bring a long-awaited and long-suffered definitive solution in our favour. Only it doesn’t look like this is going to happen.In all this time, all Italy has ever done is sidestep the issue, playing for time to drag things out the duration of the current government in order to pass the buck on to the next. We’ve seen our rights constantly bypassed by ad-hoc measures taken by successive Italian governments, which appear to comply with European law against discrimination, but in actual fact evade its implementation. Our pay-slips and countless rulings from the Italian courts should be “uncontested evidence” enough. Indeed, more than enough. The Gelmini Law, a law which negates the law, blocking access to the Italian courts to a group of non-Italian nationals seeking redress, is something no country which calls itself a democracy should tolerate, and which no union of democratic countries should tolerate, either. Only now this union of supposedly democratic countries has apparently decided to condone a clear violation of workers’ rights and EU law. I beg to differ with Mr Ferguson: the rule of law is not endangered, it simply doesn’t exist if our case is indeed closed. Neither in Italy nor in the EU. So Italy’s policy  would seem to have won. But the biggest loser (apart from ourselves, of course) will be the whole concept and institution of the EU itself. This is why ALL EU member states should consider this issue very carefully before allowing what is tantamount to a gross miscarriage of justice to go ahead.Susanna Perzolli    University of Bergamo