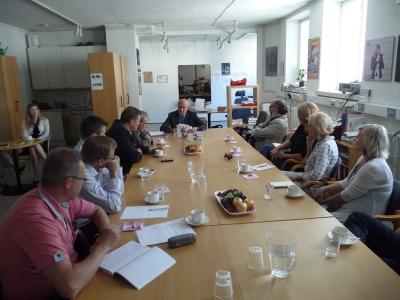 A view of the participants

HELSINKI -- "The Italian media at a crossroads: evolution or agony" was the theme of a lecture in English in Helsinki, Finland, delivered by correspondent for about 25 years in the foreign press from Italy, Gianfranco Nitti, expert, particular, on matters involving both Finland and Italy and relations between the two countries, also in his position as Finnfacts representive in the Italian market.

At the lecture, Markus Kokko and Jyri Lintunen from Finnfacts were attending too. At the invitation of Risto Uimonen, a well-known journalist and writer, Chairman of JSN, Finnish Council for Mass Media), CMM, Signor Nitti, who for many years is a correspondent from Italy for Finnish media, gave a concise and updated description about the situation of the market and the state of the media and publishing industry in Italy.

Some 15 Finnish journalists of both the television industry and of print media attendend the event, and with them, at the end of the conference, there was an interesting exchange of views, focused largely on questions relating to the situation of publishing and its link with politics.

Also present was prof. Nicola Rainò, resident in Finland since many years, among the most known translators in Italian of works of modern Finnish literature, as well as publisher of the only web magazine published in Italian in Finland, www.larondine.fi Signor Nitti described to Finnish colleagues the system of the Italian media, which, as indeed globally, is undergoing a profound structural crisis, due to a persistent economic downturn and the rapid and incessant transformations of this sector market induced by the tumultuous technological innovation.

A scenario that is characterized by uncertainty and complexity, in which the assets without brokerage allowed by the digitization process tend to foster new economic and business models in addition to traditional forms of publishing. In this new dimension of the market, problems arise but are also present new opportunities for growth of the system, related to innovation and to different types of content usage information.

The lectures gave a summary of the problems related to the decline in sales and advertising revenues, in readers and circulation of newspapers, the rise of online publishing activities, growing employment difficulties of journalists and professionals, the solutions proposed by various parties involved, requests to the Government, the recent signing of an agreement proposed by Signor Legnini, undersecretary of State, delegated to the sector, and the Italian situation in international rankings on press freedom.

The attentive Finnish audience didn't hesitate to submit very documented and relevant questions, i.e. in relation to issues of editorial ownership in Italy, to the concentration of that property, the characteristics of the development of the means of mass communication through the Internet, connections between politics and the editorial market and related conflicts of interest already well known at the international level but that don't cease to arouse wonder and perplexity in Finland .... It was ultimately a meeting that was mutually beneficial, considering the context in which it took place: in fact, the JSN is a body that has no counterpart in Italy, a self-regulating committee established in 1968 by publishers and journalists in the field of mass communication.

Its task is to interpret good professional practice and defend the freedom of speech and publication. CMM does not exercise legal jurisdiction. The journalists and other personnel engaged in media who have affiliated to the CMM have, ipso facto, committed themselves to advancing and upholding the ethical principles of the profession.

Any person who considers that there has been a breach of good professional practice by media may bring this to the attention of the CMM.