Made in Italy: Could a new roof save Pompeii? 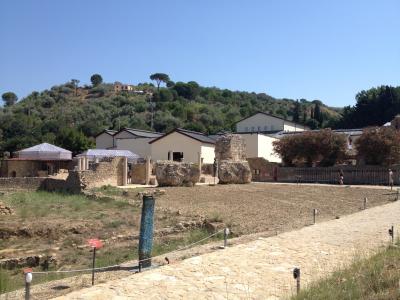 General View of the New Roof at Piazza Armerina

ROME -- Can Piazza Armerina help save Pompeii? Both are Unesco World Heritage Sites, but in simple archaeological terms the ‘Villa of Mosaics’ (as it is known locally) is more important than the Vesuvian city. The villa is surely the greatest house of the 4th-century world; Pompeii was an important city but never a great one. Of course, archaeological importance pales beside the relative importance of these places today as global and national assets. Six million visitors each year suffer Pompeii; 400,000 trek annually to central Sicily to the villa.

Until recently, visitors to the villa had to suffer too. The old Perspex roof covering the ruins created an intolerable, asphyxiating atmosphere. The air inside this curious capsule was tepid, extraordinarily hot and utterly unpleasant. Worse, the sumptuous array of mosaics was permanently illuminated by the unforgiving Sicilian sun. Relic walls cast long shadows that further confused matters. The pavements were bound to suffer from the heat, light and humidity. The authorities were reduced to signs encouraging sweating visitors to keep going to see a mosaic depicting bikini girls, as though this celebrated pavement was a prescient forewarning of bunga bunga in high places.

A new roof replacing the scratched and battered perspex one has just been opened. It works wonderfully well, giving majesty back to the extraordinary visual narrative in the mosaics. It was designed by the Milan-based conservation architect, Gionata Rizzi, whose portfolio includes covers at the great Mayan capital of Copan in Honduras and….Herculaneum, the smaller Vesuvian city. The success of this roof, however, begs many positive questions that have far-reaching implications.

The earlier Perspex roof invoked the 1960s, a plastic, science fiction response to great archaeology.  The old roof was certainly striking but for visitors it did not conjure up a palace except perhaps on the moon. Now, the main house with its labyrinth of rooms arranged around a large courtyard feels like the home of a grandee with a voracious appetite for the visual myths and wonders of the then known world. Whether he was an Emperor or simply a wealthy Mafioso, the galleries of extraordinary mosaics made for him, like magic, now make sense.  The elegantly moulded apsed rooms with roofs supported on exposed beams have been cleverly recreated. But this renewal is not some tawdry casino-like copy worthy of Las Vegas. The chief excitement generated by the new cover is the plain and simple fact that sunlight no longer makes the mosaics invisible.

The bikini girls, as a result, couldn’t be clearer.  These girls, of course, have had no truck with bunga bunga. These are athletes, Olympians of sorts, practicing for games that involved women of the highest rank. Like other mosaics here, the detail and colouring is truly thoughtful, the work, many art historians now believe, of North African craftsmen. Cleanly lit now, it is not so much the artisanal expertise that delights as the intersection of mythical and contemporary stories arranged to enhance the design of the house. Like a great English country house, the imagery has an overarching cohesion. Positioned close to the long corridor displaying the great hunt, the lithe bikini girls are being put through their paces opposite the ante-chamber to the master bedroom, but at the head of a corridor. Perhaps some discrete mischief was being invoked after all. You, the visitor, can now judge!

One other aspect of this new project is obvious. Guards are absent! The elevated walkways, monitored presumably by cameras, make the intrusion of bored and disgruntled attendants superfluous. This ancient country house is now simply filled with people exuberantly taking in a marvelous experience.

The roof, it needs to be said, is not finished. Two sections covered by Perspex remind one of the batty plastic solution.  Presumably the money ran out or, less probably, these relics have been retained as part of the site history.

So, why is this new roof so important? Simple: imagine several or all of the great atrium houses at Pompeii covered as elegantly, with an intelligent grasp of the sustainable conservation of the monument. Imagine Pompeii without its cantankerous guards. With 6 million visitors a year and an annual revenue of well over sixty million euros, how many houses might be re-exhibited for eager 21st-century audiences, their frescoes and pavements conserved for on-going public display? Over twenty years is it not possible to imagine thirty or forty houses returned to feed the intellectual appetite of a world which will never lose its fascination with the place.  As for the availability of contemporary craftsmen, Italy prides itself on capable, eco architects and is a world leader in conservation.

So, can Pompeii find an elegant sustainable solution made in Italy like Piazza Armerina? Surely, it’s about the will to protect and use Italy’s assets that’s in question. A long and hard comparison of the two modern site histories is now needed.  Freed of its expedient overtones of bunga bunga, Piazza Armerina will surely prosper and bring valuable tourism to central Sicily. Can the same management changes help Pompeii to reassert itself as the globe’s most important cultural asset?

(Dr. Richard Hodges is the President of the American University of Rome) 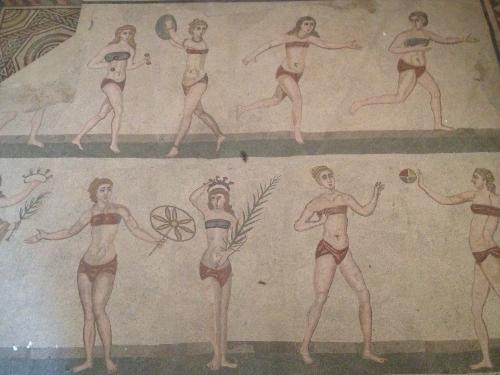