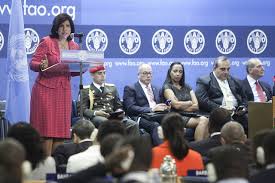 ROME– Turkmenistan, Sao Tome, Niger and Dominican Republic may deserve FAO honours for meeting UN development goals but all are in hefty arrears in paying dues to the UN agency, FAO sources say.

The four states were given an award in a special ceremony Sunday at FAO’s sprawling headquarters for reducing the number of hungry people by half, this achieving Millenium development Goal 1, while Turkmenistan and tiny Sao Tome/Principe received an additional plaudit from FAO supremo José Graziano da Silva for also achieving the more stringent World Food Summit goal set up in 1996.

However FAO observers noted that resource-rich Turkmenistan is in arrears to the FAO by as much as dlrs 560,652 and 125,105 euros, raising the question of whether the agency’s management had let it build up a debt so as to make up the numbers of states receiving awards on the fringes of the bi-annual FAO Conference under way at the moment in the Eternal City.

In all 14 states are in arrears of payment to FAO including Antigua and Barbuda, Comoros, Djibouti, Dominica, Grenada, Guinea-Bissau, Liberia, Niger, Palau, Sao Tome and Principe, Somalia and Tajikistan.

The presence of several so-called SIDs, or small island development states, among the debtors to FAO likely reflects the extent that such tiny states can get away with bending the rules because of their receptiveness to financial wooing by candidate countries during FAO elections, diplomatic sources say.

The Dominican Republic apparently had its debt that would have precluded it from voting waved mysteriously in the 2011 election for Dr Graziano while Peru also its was given voting rights back at last minute in return for a dubious deal to pay in instalments, ensuring two more players in the election that Dr Graziano eventually won by a razor-thin majority of four votes over his Spanish challenger former Foreign Minister Moratinos.

In all the 14 debtors owe FAO some dlrs 2.1 million and more than half a million euros, a not insignificant sum for an organisation battling to meet budget requirements and requesting a budget increase of some 6 percent, FAO watchers noted.

OECD countries are concerned that postage stamp size states are being allowed not to pull their weight to keep them sweet ahead of the elections two years hence in which Dr Graziano is already planning his re-election while the West is being asked to increase its contribution to the gravy train.

Among those addressing the ceremony Sunday was the Dominican Vice President, who is also the wife of the island state's former president as well as a special FAO ambassador. Revolutionary Venezuela had the biggest delegation of as many as 80 people.

On Thursday hundreds of delegates including many Muslims, Buddhists and members of other religions as well as Roman Catholics will travel to the Vatican in a fleet of special FAO buses for a climax of the agency's jamboree, an unctuous audience with Argentinian Pope Francis, FAO sources say.