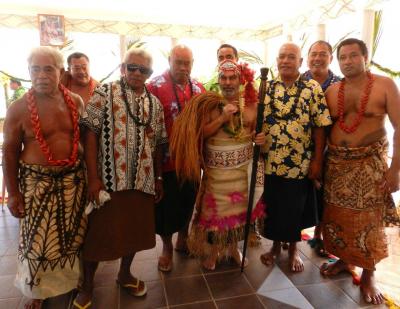 Dr Graziano (centre, with stave) during a recent visit to Samoa

In a formal complaint to the FAO’s professional association, a senior executive described how an FAO Senior Officer and a woman Consultant made a presentation on Climate Change in 2010 at the agency’s headquarters in Santiago, Chile, then headed by the future Director General.

“After the presentation the floor was given to the participants for eventual comments and request for clarification … Mr Graziano gave then his closing remarks in which he declared publicly that the contents of the presentation were a bunche of ‘huevadas’  (the closest possible translation into English in this context corresponds to ‘bullshit’ or ‘crap’, this openly expressed to all the colleagues present.”

In the note for the file, a document seen by Italian Insider, the executive commented that “I do not seriously think that such a behaviour corresponds to what one should expect from a high level International Civil Servant working in an Organization of the United Nations and represents a significant lack of respect not only to the speakers of the seminar but to all colleagues as a whole … I personally consider such a behaviour of being a matter of Administrative Harassment … “

While use of such earthy language may be common in some working environments, strong words are generally frowned upon in the rather prim upper echelons of the United Nations. The complaining officer added that “I never came across, during my now accumulated 32 years of continuous professional services with FAO, primarily in the field, such a deplorable event coming from a high ranking International Civil Servant.”

A senior FAO insider described the incident as not untypical of the abrasive management style adopted by the Brazilian director general since he took the helm of the UN agency near the Circo Maximus ancient Roman charioteering stadium.

“This is the way he dismisses people who he disagrees with, denigrating them and trying to destroy their personal integrity,” the insider claimed.