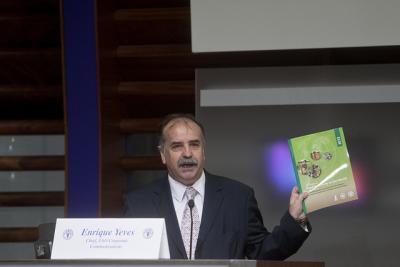 Dear Mr Phillips, I am profoundly astonished by Jan Filipowicz’s article on FAO’s budget proposals for the 2014-2015 biennium which manages to get most of its facts wrong.

The Conference of FAO member countries will indeed meet from 15 to 22 June to decide on the Director-General’s proposals for the work and budget of the Organization for the next two years. This includes a proposed real increase of 1 percent in the budget compared to the current budget level of FAO. This is a fact. A fact which is clearly laid out in the document entitled Programme of Work and Budget 2014-15, which is openly available on the FAO internet website. This document not only outlines the resources required for FAO to pursue its objectives of ensuring food security and nutrition worldwide, but also details in a transparent manner every single programmatic, operational and administrative area where these resources will be spent.

The implementation of FAO’s programmes is undertaken in a transparent manner with robust monitoring and reporting, and the related expenditures are scrutinized by various oversight mechanisms, including Evaluation, the External Auditor, and the governing bodies such as the Finance, Programme and Audit Commit tees, as well as the FAO Council.

Therefore, your suggestion that any of this money could be used for “facilitating the DG’s re-election” or giving “more slush fund jobs to his friends” is disrespectful. In addition, since taking over in January 2012, the Director-General has strived to make FAO more effective and efficient, reducing waste and cutting bureaucracy.

In the first year alone, an unprecedented 25 million dollars was identified in efficiency savings, with the abolition of 88 positions, mainly in administrative functions at the Rome headquarters. At the same time, the technical and operational capacity of the Organization to deliver real results has been strengthened, with the member countries agreement to reallocate savings to these areas, including in decentralized locations.

Please also note that the total cost of the Office of the Director-General fell over 10 percent in 2012 in comparison with the previous four-year average. The DG has contributed to this reduction, for instance, by flying low-cost whenever this is a viable alternative. This has contributed to a reduction of over 30% in his office’s travel expenses in comparison with the previous 4-year average –even though he visited over 40 countries in his first year in office.

The reference to the use of consultants at FAO in your article is spectacularly wrong and gratuitously misleading. The naming of three individuals is not only distasteful, but associating them with the earning figures quoted in the article is wildly inaccurate. None of the three persons in question earn anywhere near the USD 20,000 cited in your article. The advisers to the Director-General are driven by their commitment to FAO and its mission of eliminating hunger and malnutrition, and are paid well below some technical experts and consultants recruited by the Organization.

On a more general point, the rates for consultants at FAO are significantly lower than in comparable agencies. This was highlighted in a 2012 report of the United Nations Joint Inspection Unit, which found in surveying 19 UN system agencies that the daily rate ceiling for consultant earnings was the lowest at FAO.

You also wrongly say “30 people now work in the Director-General´s office compared to 12 under his predecessor”. I am not sure from where you get this information but it is totally absurd since the number of staff working in his Office is now the same as before.