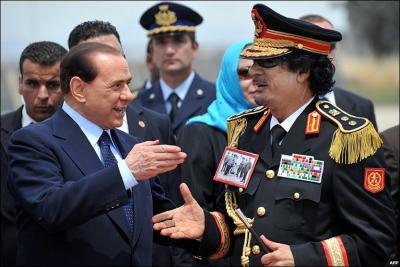 ROME–Whatever happens in Libya over the next few days and weeks will have more impact on Italy than any other country apart from Libya itself. And yet there is a deafening silence in Italy about what should be done there. In the US there is a furious debate over whether America should intervene or not and if so, how. It cuts across party lines and covers politics, ethics and commercial interests. President Sarkozy weighed in with France’s recognition of the provisional government. This has once again put the Elysée among the world’s foreign policy leaders. David Cameron has supported Sarkozy’s calls for airstrikes if Qaddafi attacks civilians while Chancellor Merkel has said that she is “fundamentally sceptical” about military intervention.

Here in Italy, there is almost nothing. Obviously the papers lead with the Japanese earthquake and tidal wave but not only from the Japanese angle. What has happened there is used for or against Italy’s renewed commitment to nuclear energy.

A good deal of space is devoted to the anniversary of Italian unification on Thursday and then there is still a fair amount of coverage of Berlusconi’s trials and his proposed reform of the administration of justice. Libya is very low on both the media agenda and the government’s.

The foreign minister, Franco Frattini put Italy’s position in a letter to Corriere <http://www.esteri.it/MAE/IT/Sala_Stampa/ArchivioNotizie/Interviste/2011/... [1] <#_ftn1> della Sera on Saturday. He said that “Italy had no uncertainties” and wanted to clear any “doubts and uncertainties”. He did this by saying that if others (the EU, the UN, the Arab League) led, Italy would follow. It was a very firm maybe; reiterated today at the meeting of G8 foreign ministers where he called for “an immediate ceasefire in Libya” <http://www.esteri.it/MAE/EN/Sala_Stampa/ArchivioNotizie/Approfondimenti/... [2] <#_ftn2> ; at the moment it is more likely to snow in Benghazi than for Qaddafi’s troops to stop fighting.

This sort of low and non-committal profile would be unsurprising for a country far away and with few links and interests in Libya. But Italy is not Costa Rica, say, or Latvia. This is the former colonial power which governed Libya for 30 years fighting a long and bloody war there and establishing cultural and commercial ties. Italy relies, relied on Libya for almost a quarter of its oil and a tenth of its gas. There are huge investments by Libya in Italy from banks to football clubs and vice versa in oil and civil engineering. If there is a major humanitarian crisis in Libya with thousands of refugees, Italy will bear the brunt of it. On top of the national political and economic interests, the Qaddafi’s personal link Berlusconi was stronger than with any other head of state or government. The footage <http://www.liveleak.com/view?i=955_1269878105> of Berlusconi kissing Qaddafi’s hand has gone the rounds and was vaunted by Qaddafi himself.

As Franco Venturini pointed out <http://www.corriere.it/editoriali/11_marzo_10/venturini-doveri-occidente... [5] <#_ftn5> in Corriere della Sera for the former colonial power to keep such a low profile and follow the stream is neither good for Italy’s image or its interests. Italy is a major economic power and has a well-earned reputation for both military, peacekeeping and humanitarian initiatives abroad so should be doing rather more.

In the distant (Fascist) past, Italy’s aggressive foreign policy actions were disastrous and partly as a reaction, during the Cold War, the country kept a low profile sheltering under the American umbrella. But since 1989, Italy has developed a more active foreign policy in keeping with the post-Cold War world and its own status.

Today’s silence is not only unbecoming, it is against Italy’s own interests and a renunciation of responsibility. No one expects Italy to take unilateral action, but to have a position like the French, the British and the Germans is not too much to ask. Or at least to debate the issue.

And it is not only the government that is absent; opposition leader Pierluigi Bersani mentioned Libya a week ago, but only to criticise Berlusconi’s links to Qaddafi. The other centre-left leaders have been similarly reticent. The centrist Pierferdinando Casini has been more forceful suggesting today that the EU should act now <http://affaritaliani.libero.it/ultimissime/flash.asp?ticker=140311130029> [6] <#_ftn6> . But there is no debate similar to Kerry <http://english.aljazeera.net/indepth/opinion/2011/03/20113149418200102.h... [7] <#_ftn7> and McCain advocating intervention against Gates and Rumsfeld wanting to hold back. Nor have the papers been any clearer. Apart from Venturini’s piece there has been very little either in favour or against intervention.

My own position is that Italy and the rest of the EU should be prepared to act militarily - aggressively if necessary; the “no fly zone” is a fictional “non-aggression” policy. But only if and when there is imminent danger of a humanitarian disaster.There should be four conditions met for justifiable intervention: it should be legal; it should be legitimate; it should be in the intervenors’ interest and it should be practical. Action in Libya will never be sanctioned by the UN but it could become legitimate if, or rather when, Qaddafi starts his reprisals. The Arab League’s demand for intervention also creates legitimacy which could be made even more visible by Arab military cooperation as in the 1991 Gulf War. Material interests are already present for Europe and neighbouring Arab countries. Finally, most defence analysts reckon that Qaddafi’s armed forces could be dealt with relatively easily by well-trained and equipped troops. It is clear that unlike Iraq or Afghanistan, the vast majority of the population would support intervention.

The nearest parallel is Kosovo in 1999 when all conditions were fulfilled except a UN resolution. Such an action would require the painstaking diplomacy that George H. W. Bush and other carried out in the lead-up to the Gulf War. In 1999, there was some ambiguity in Italy, but there was a debate. Today, the silence is deafening.