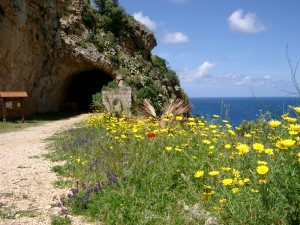 Angus Campbell follows in the Sicilian footsteps of 17th century Scots adventurer William Lithgow, discovering a nature reserve where the sea and the land are an indistinguishable, wondrous whole.

CASTELLAMARE DEL GOLFO, Sicily – I have to thank Bonelli’s Eagle for my spending the night inside the Zingaro Nature Reserve near Trapani, on the western tip of Sicily. Though not a rabid bird watcher, I am infatuated by birds of prey and the discovery that the Bonelli breeds there regularly got me onto the phone and into the car to the Reserve’s offices at Castellamare del Golfo in a flash (I live close by). The Reserve is a huge celebration of unspoilt Mediterranean flora and fauna, karst caves, mountains, beaches and underwater wonders; the world as it was before we got our nasty little hands and feet going on it.

‘It can be a bit cold at this time of the year, and you do realise there are no toilet facilities, but, yes, there are overnight sleeping shelters’, they said at the offices. They also told me that 170,000 people visited the Reserve in 2009, but that only 22 individuals spent the night there. Why? Probably people didn’t know you could or they didn’t travel with sleeping bags, and in summer a lot just came in to look and swim.

I decided to go with a friend who knows the place of old. Food, we agreed, should be cooked rather than taken in packets or tins, so rabbit was selected, being a traditional sort of dish in these parts; in the past procured by double-barrelled shotguns but, in our case bought from a local butcher. The cheese (tuma and primo sale) and the olives were also local, as was the wine (we opted for a Nero d’Avola). You have to carry your own water, as the shelters only have rainwater tanks, as well of course as sleeping bags and extra blankets, food, torches and matches all stuffed into rucksacks. Our plan was simple: to enter by the northern gate at Scopello, walk up to contrada Sughero for the night (about 400 metres high, a hike of about 2 hours), and out at the southern entrance at San Vito lo Capo next morning (another 2 hours).

In 1981 my friend had taken part in the public protest that had quashed the proposed advance of the coastal road, the grimy rim that befouls most of the Mediterranean basin, on this bit of coast line; it paved the way for setting aside these 1,650 hectares of absolutely unsullied Mediterranean territory as the Zingaro Nature Reserve. So we did not have to fight our way through a maze of pizza joints to get to its entrance and, after that it, was simply a process of elbowing a way through the yellow broom and blue rosemary bushes from sea-level into the hills of the Reserve, leaving everything ordinary behind us.

All visual reference to the normal pattern of country life (trees, roads, houses, people, clutter, dogs, unevenness, noise - above all noise) ceased to be, and all that matters in everyday life vanished. A sudden sense of expanded dimensions, and complete silence came down from somewhere. An unnerving experience, because it was almost instantaneous. In front of us a red-brown path threaded its way up through the Mediterranean scrub to rusty-grey limestone mountains high above us, nudging a sky infinitely bluer than any to be seen in shimmering summer heat. Such was the quiet we would surely have heard a native of these parts, that rare primitive flightless orthopteron Pamphagus marmoratus, peeing - had he had been rude enough to do so.

We were a little early for the Spring floral explosion, but I did see some lovely early orchids and a crocus or two, as well as beautiful bright mauve anemones. If we had been walking a little later, in mid- April, two new shrubs would have been in flower and eying our progress, the teuchrinium fructans or tree germander and the cistus incarnus(one of the many rock roses that flourish here), as we picked our way over many varieties of orchid (lunulata, italica, branciforti, speculum, to name but four) and through pimpernel, love-in-a-mist, and iris sisyrinchium - even, if we were lucky, paeonia mascula.

No sign of the Bonelli Eagle, though. The main flowers around us were the asphodels, much loved of northerners, including myself, but inexorable signs of infertile land for Sicilians: there were so many of them standing erect on the ground they looked like candles set out for a religious ceremony. Nestled in and around the rocks were the cash crops of those who used to live here before the land was abandoned and the Reserve took over: dwarf palms and ampelodesmo (a Mediterranean grass that grows in clumps) - they used to be marketed for mats, brushes, fans, vegetable-hair stuffing, twine and ropes; the local Trapanese pasta was wound round the stalks of theampelodesmo (busi in dialect) and today when you order it in a restaurant you ask for ‘busiati’.

The only non vegetal-mineral hazard we met on the way was a small herd of cows and their drover which kept crossing our path, travelling at quite a pace: apparently pasture is rented out. When we arrived at our overnight destination the land around the house under the almond trees had been snouted up by porcupines looking for roots to eat. The area of Sughero is a loose hamlet of eight former peasant smallholdings about 400 M above sea level, the cottages now abandoned. Behind is a high ridge of mountains; the sea is sheer below. The cottage we had was typical. In its restored form it has two beamed-rooms, wooden tables and benches, wooden-surfaced beds, nolavatory; cutlery, plates, cups, candles. Outside there is a rainwater well, a wood-burning oven, a barbecue (actually an outside kitchen called a tannura in dialect), a lot of fire-wood, and a palmento for pressing grapes with your feet - should you feel so inclined. Just what a Victorian traveller would have met with, but absolutely no fleas, which he complained of perpetually: the house, though simply furnished, was spotlessly clean. The first job was the fire. We had brought a newspaper, of course, and matches but there had been rain. Would the twigs and branches ignite? Long-forgotten Italian and British scouting experience was conjured up and somehow it did — the rabbit (seasoned with olive oil, garlic and oregano), cheese and olives were wolfed down in candlelight, while we watched the lights come on across the bay of Castellamare del Golfo - which was spectacular. Of course it tasted magnificent, because we had been walking and were tired, because we had cooked it, but also because we were the only people in a magical place. In our sleeping bags on the wooden beds that night we slept deeply, well pleased with ourselves.

In the morning mist hung above the clumps of ampelodesmo below the mountains behind us, but it was clear on either flank, as it was on the sheer fall to the bright blue sea in front of us. Deeply silent, except for a few birds (a pair of soaring buzzards, but still no Bonelli eagle) and two or three fishing boats chugging along far away below, probably cleaning their nets; also the bell-like conversation of an early gang of Guardia Forestale workers on maintenance work (the Forestry Commission, does the heavy work on the Reserve). They were most surprised to see a movement at our cottage and made a discreet approach to find out who we were: “Were you disturbed by the grunting of wild boar in the night?” “Not at all” “No, well I suppose they don’t get down as far as this”. This settled, they went back to their work.

Looking around at the sea-misty mountains behind, the rusty cliffs to the right with their mysterious cave-openings, the former smallholding where we had slept, the Mediterranean scrub with dwarf palm and ampelodesmo grass, the almond trees, the asphodel candles, the sea with the fishing boats, the land where passing cows would probably soon be grazing, the whole amalgam in fact… a topsy-turvy phrase came back to mind that sums up the Zingaro perfectly. The Scotsman William Lithgow wrote it in the first half of the 17th century in these parts: “…and the best coral in the world is found here, beside Trapani, growing under the water green and tender, but when arising above it becometh red and hard…”. He wasn’t confused, poor thing; he got it absolutely right: the sea and the land here are an indistinguishable wondrous whole.

Going down we passed the giant apse-like entrance to the Grotta dell’Uzzo, a cave that has sheltered human beings and animals since paleolithic times. The descent should obviously have been quicker than the climb up, had my companion not taken on the task of checking out a friend’s house, one of the very few private ones inside the Reserve (the owners cultivated almonds before it had been set up), to see that everything was all right and that mice hadn’t invaded during the winter. We took a short detour to the cove of Uzzo (the small white calcite pebbles on the beach make the colour of the sea there unbelievably blue). Unfortunately the key to the house’s separate kitchen didn’t work, so the planned meal did not materialize, and we had to make do with an excellent lunch, just outside the Reserve, of traditional Trapanesecouscous at a restaurant in San Vito lo Capo. In the end I didn’t see Bonelli’s eagle, though I’m sure he saw me. I didn’t see the wild horses loose high up in the mountains either, the karst caves or the Stone Forest morphologies, and it was too early to swim in the coves along the utterly unspoilt coast. But I’m lucky: I live near here and I can come back.

A few things to remember. You have to book in advance if you want to sleep inside the Reserve: by e-mail at: info@riservazingaro.it. You can click this direct from the “I Rifugi” section of the website. The cost is €5 a night. For reasons outside the control of the Reserve (Italian terrorist laws) you cannot stay for more than two consecutive nights, though that could give you three full days. The summer months of June to September inclusive are out - as a precaution against forest fires. You have to carry all your food with you. Include matches, lavatory paper and drinking water. Suitable walking shoes and a sleeping bag are necessities. 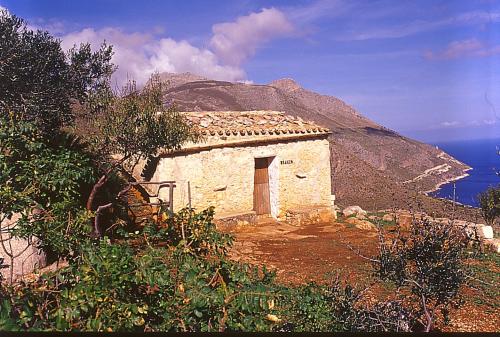 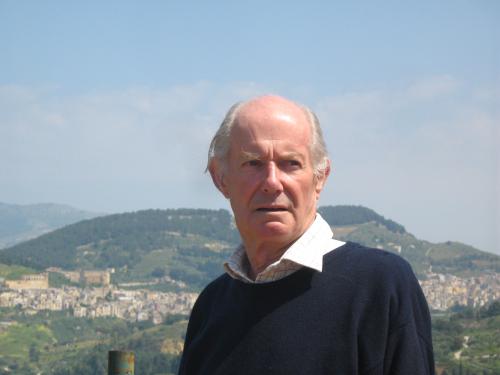