A leader for difficult times 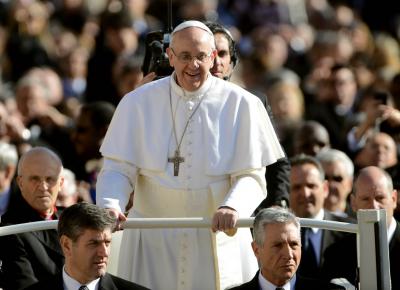 Pope Benedict and his successor could hardly be more different, but between them they have a good chance of revolutionizing the image of the Roman Catholic Church.

The shy pope who preferred books to people, who loved papal pomp, Latin liturgy and dogmatic precision has been followed by an easy-going pastor who rejects ecclesiastical finery, seeks a direct contact with his flock and even gives an etiquette-busting thumbs-up sign from on board the pontifical jeep.

When a pope last met a living predecessor it was more than 700 years ago and did not end particularly well. Pope Boniface VIII decided to prevent any undermining of his authority by a pope emeritus by ordering the unworldly former hermit Celestine V be locked up in prison.

Things were probably not quite so grim when Francis met Benedict in Castel Gandolfo, but the new pope will have gained a clearer understanding of the challenges that lie ahead as a result of this unique pontifical briefing.

Francis’prophetic option of a “poor church, for the poor” is likely to meet opposition, and not only in the Roman Curia, from prelates who enjoy the trappings of earthly power and see it as an essential instrument for their mission.

A Mexican newspaper recently published a photo of one of the country’s cardinals who had just hitched a lift on the executive jet of a billionaire businessman: a far cry from the stylistic choices of Jorge Bergoglio, who used public transport in Buenos Aires and has shunned the official papal limo.

“In the history of the Catholic Church, the real innovators are the saints,”Bergoglio wrote in a 2010 book co-authored with a Jewish rabbi. St Francis of Assisi had introduced a new concept of poverty that challenged the luxury, pride and vanity of the civil and ecclesiastical powers of his time, he wrote.“He developed a mystic of poverty, of spoliation, and he changed history.”

Bishops will soon be called to give a public accounting of diocesan finances and the Vatican Bank will be radically reformed or abolished, Vatican watchers predict.

While Benedict, old and ill, was oppressed by the intractable problems confronting the leader of the world's 1.2 billion Catholics, Francis seems to have a messianic faith in the power of repentance and conversion to right the yawing bark of St Peter.

Pope Francis’ physical appearance has been likened to that of the actor Jonathan Pryce or to Michel Piccoli, the pope who ran away in Nanni Moretti’s film“Habemus Papam”.

But perhaps the real resemblance is to the simplicity and honesty of his predecessor John Paul I, whose 33-day reign was too short to show how determined a reformer he might have been in practice.

However obstinate the forces ranged against him today, Francis’ chances of success look reasonably good.

Francis is a stronger man than Papa Luciani and the church he leads is weaker. Above all, the uplifting moral leadership he has sketched out in his first days in office appears to be just what these difficult times – of economic crisis and ideological drift – demand.