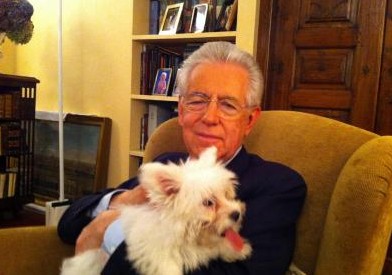 ROME - It is unwise to learn your part when you are already centre stage… even unwiser to change parts. Mario Monti is too old to heed Polonius’ advice to his son “to thine ownself be true,/ And it must follow, as the night the day,/ Thou canst not then be false to any man.

But he clearly is listening to Obama’s guru, David Axelrod, trying to soften his image and be a “man of the people”. This week, the austere technocrat-economist played the active grandad with children and crayons in a kindergarden and then cuddled a stray dog emulating Nixon and more recently Berlusconi – surely neither are his models?

For his part, Silvio Berlusconi sticks to his well-tried (and successful) character believing Hitler’s theory that people are more likely to believe the big lie than the small one. After promising “a million new jobs” in 2001, yesterday he promised four million but rather spoiled the effect by semi-retracting and saying it was just an “hypothesis”. The remark comes after his Sunday “shock announcement” that he would reimburse last year’s property tax, IMU, at his first cabinet meeting and cancel it in the future, at least for first houses. He has promised other “shock announcements” before the end of the campaign.

Another lie or at least a manipulation of the truth is his opinion poll that maintains he has reduced the gap between his own centre right coalition and Pierluigi’s centre left to less than 2% which if true would mean that he could win in the fortnight between now and the elections.

Other polls, less friendly to Berlusconi tell a different story. Renato Mannheimer in Corriere della Sera puts the gap at 7.5% (37.2 to 29.7 with Monti’s coalition at 12.9 and Bebbe Grillo’s Five Star Movment at 14.3) though Mannheimer’s data is inconclusive in the two key regions of Lombardy and Sicily which the centre-left must take to have a good chance of having a majority in the Senate. Ilvo Diamanti in La Repubblica is less optimistic for Bersani but still puts the gap at 5.5% (34.1 to 28.6 with Monti and Grillo both at 16).

The conclusion is that unless something extraordinary happens over the next fortnight, the centre-left will win the Chamber – their 32-35% will earn them 55% of the seats but will probably not win the Senate and so will need the support of Monti’s centre. A Monti-Bersani alliance was always on the cards but until this week, was never talked about out loud. As a minister, Bersani was far more of a reforming free marketeer than most of the centre-right; he shares much policy with Monti. Now they have taken the dangerous option of actually talking about a possible alliance.

To their left (Grillo and Ingroia) and to their right (Berlusconi) the message has always been that a vote for Monti is a vote for Vendola and vice versa. A Bersani-Monti alliance would give subtance to the message, a serious risk. The possible gain is that the policies and positions in a Bersani-Monti government are clarified and exorcised of their demonic undertones.

The PD’s economic spokesman (and probable minister), Stefano Fassina, has said that the economy is too crucial to be farmed out to a coalition ally – a personal and a party statement. But he is unlikely to prevent the formation of a government just because he is not given a cabinet post; in any case, there are ways of finessing both positions and policy. In the past, Italy had three economics ministries: budget, finance and treasury. There are still overlaps. There is space on social issues for Vendola; he would like to see gay marriage but would settle for civil unions and two days ago a senior Vatican official, Mons. Paglia opened towards the idea of legal protection for de facto couples though strenuously denied any opening towards gay marriage or even civil unions.

Will the odd couple of Monti and Bersani manage to maintain a government for more than a few months? Grillo has given them 6 months which is wishful thinking. My own guess is a little more optimistic though it too might be wishful thinking. External pressure from the markets, the ECB and the EU and internal ambition in the centre-left and fear of repeating the splits and collapse of the Prodi governments will hold the government together, maybe even for the full five years. Vendola is not Bertinotti whose ideological purity combined with internal bickerings brought down Prodi in 1999. Vendola is a pragmatic politician who has administered a big region pretty successfully on the whole and he is not going to blow his chances lightly.

On the other side, Monti is obviously not a man of the left and presumably his medium term goal is to establish a respectable Italian centre right, a 21st century Christian Democracy. At the moment there is some tension within the European Popular Party most of whose leaders have endorsed Monti but which still includes Berlusconi and his Popolo della Libertà (PdL). If the PdL does lose, then the most likely scenario is that Berlusconi finally steps down, the PdL fragments (as it was beginning to do in December before Berlusconi came back “onto the field”) with some of the rump going to Monti in time for next year’s European Parliament elections.

There is another question that seeks an answer as the campaign goes into the final straight: Grillo. The likely 100 or so grillini elected will have to learn parliamentary procedure very quickly (if I was an editor, I would assign a journalist to find out who the 100 will be and where they come from… maybe I should get a student to do it as I don’t think anyone else has done it). If they do not invent an institutional format quickly, they will dissolve quicker than the winter snows and it is not at all clear what form they might create.

As in previous election years, the American University of Rome will be hosting a two day conference covering election issues, parties, policies and personalities, with analyses from scholars, journalists and politicians. This year it will be on 8-9 March 2013 originally a month before the likely date of the elections, now two weeks after the 24-25 Feb elections. The keynote speeches will be given by Paul Ginsborg and Gianfranco Pasquino.