Italian censorship – “Girlfriend in a Coma” 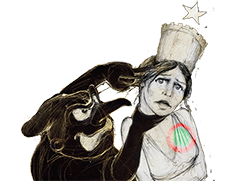 ROME - In order not to “host events with political implications”, the director of Rome’s modern art gallery the Maxxi, has cancelled screening a controversial film.

The film is “Girlfriend in a Coma”, a new documentary by former Economist editor, Bill Emmott and the Italian documentary-maker Annalisa Piras. It is (apparently, because no one in Italy has actually seen it), an affectionate but damning picture of Italy’s decline over the last two decades. The guilty parties are many – the various governments of course, but not only… and whatever they say, it is hardly hot news.

Even if it was, the intention of avoiding controversy during an election seems somewhat misplaced. As Obama remarked of Bill Clinton’s protestations that he had smoked marijuana but not inhaled. “I thought that was the point”. I always thought that elections were the moment when democratic societies could and should let themselves go (sometimes excessively) and debate controversial issues. Isn’t that the point of elections? To compare points of view and responsibilities? And then decide.

Before Christmas there was talk that the San Remo song festival (normally a hymn to banality) should be postponed because the hosts, Fabio Fazio and the comic, Luciana Littizzetto are notoriously critical of Berlusconi.

Just last week, a Milan court refused to postpone its hearings because the accused (Silvio Berlusconi) and his defence counsel (Niccolò Ghedini and Piero Longo) were busy in the election campaign… but the prosecution accepted the request. The court will go ahead with the hearings but has decided to postpone the verdict until after the elections. But wouldn’t the democratic process be better served if the Italian voters knew that a candidate for prime minister was either guilty or not guilty of creating slush funds for his companies?

In the case of the MAXXI censorship, there seem to be even less noble motives.

The museum president is the former Democratic Party minister of culture, Giovanna Melandri. She was appointed last year by the present minister, Lorenzo Ornaghi. The museum press release implies that it was the ministry that ordered the censorship something that the ministry has denied. According to La Repubblica, the British Embassy has become embroiled in the affair, trying to look after a Briton’s interest (Emmott) but also some European values like freedom of expression. The film presumably also criticises the left so could be embarrassing not only for Berlusconi. Il Fatto Quotidiano suggests that the ban is to protect Massimo D’Alema and other from the left from accusations of not having dealt with the conflict of interests issue.

The whole business smacks of rather petty covering of backsides and very petty politicking of favours.

But at the end of the day, it demonstrates why Freedom House rates the Italian media as “partly free”. We are a long way from North Korea but in the middle of the European Union, we shouldn’t even be thinking of that comparison.

I very much hope that Melandri will reconsider her decision, but if she doesn’t, the American University of Rome is more than happy to screen the film. Sadly, our campus was not designed by Zaha Hadid but our statute and mission not surprisingly, encourage controversy and debate.