Raul Wallenberg on the Day of Memory 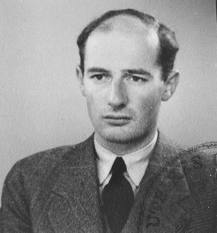 ROME - On Sunday evening the lights on the Colosseum were turned off as part of Rome’s contribution to the Day of Memory. For almost 20 years now, turning off the lights has been the city’s gesture against injustice. Initially it was part of the campaign against the death penalty and in recent years, the scope has widened.

This year, the initiative is not only to commemorate the liberation of Auschwitz in 1945 but also to protest against “antisemitic acts and statements by the xenophobe Hungarian party Jobbick”.

The contemporary Hungarian connection is a reminder that last year was the centenary of the birth of Raul Wallenberg, the Swedish businessman turned diplomat who saved tens of thousands of Jews in Budapest in 1944 and then was detained by the Soviet authorities early in 1945. He disappeared and was killed, possibly in 1947, probably much later. The Swedish Embassy here in Rome organised ceremonies and conferences in October to commemorate Wallenberg and reprinted a biography by Domenico Vecchioni all very much part of the Day of Memory and today’s Hungary.

Wallenberg was doing business in Hungary, Germany and occupied France in the early part of the war. In the Spring of 1944, Germany actively occupied Hungary which had been a more or less independent ally till then. They began deporting Jews and enough news was available for President Roosevelt to take action. Because he knew Hungary well (and spoke Hungarian) Wallenberg was approached by Americans from the War Refugee Board and members of the Jewish community in Sweden to work on the protection and relief of Hungarian Jews.

He was given a job and cover as a Swedish diplomat and by the summer was at work in Budapest. He issued tens of thousands of false so-called “protective passports” which were accepted by the Germans and the Hungarian Arrow Cross. This was a ploy used by diplomats trying to save Jews in occupied Europe. The Italian consul in Thessalonika, Guelfo Zamboni issued Italian nationality certificates to hundreds, only covering himself by adding a handwritten “provisorio”, “provisional” just in case, as he said, someone might object to his breach of procedure.

Zamboni was a real diplomat as was Carl Lutz, the Swiss vice-consul in Budapest who along with the Swiss minister, Harald Feller protected Budapest Jews and saved thousands of them.

But Giorgio Perlasca was not. He was a veteran of the Spanish Civil War who because he had volunteered in 1936 was not called up again in 1940. At the time, he was a not very successful businessman in Budapest. Because of the Spanish connection, he started working for the embassy which by 1944 along with the Swedes and Swiss was actively protecting the Jews of at least Budapest. When the real Spanish diplomats left Budapest in December 1944 as the Red Army approached, Giorgio became Jorge and for almost two months faced off the Arrow Cross armed only with courage and considerable nerve. In one episode, he threatened repercussions on Hungarians living in Spain if they touched the Jews under Spanish protection – he had no idea if there were any Hungarians in Spain and had no possibility of acting on them if there were; but it worked.

Rome has its own memory. There is a square close to the Tiber entitled “16 ottobre 1943”; it is site close to what used to be the gated papal ghetto where 1024 Jews were rounded up by the German authorities and send to Auschwitz. More than 200 were children, none of whom returned; of the others 15 men and one woman came back. Over the next few months more than another thousand Jews were deported from Rome.

The need to remember is as important as ever. Last year there were antisemitic tweets in France and in Naples, this week the member of “soft” and would-be respectable neo-fascist “Casa Pound” were accused of planning to rape a Jewish woman . There is an Italian version of Golden Dawn which is also anti-semitic “Let’s just say that the banks are run by a gang of zionist vampires” And then there were moves by a Jobbick MP to register Jews in parliament which were the reason for including the party in tomorrow’s ceremony.

It is ironic, though, that Rome’s mayor, Gianni Alemanno is keen to present himself as close to the city’s Jewish Community when he has never publically condemned fascism and his own neo-fascist roots (unlike Gianfranco Fini who has paid the political price for his principles). The Rome community is mostly conservative and the mayor is up for election in May.

Alemanno was invited to the Wallenberg commemoration but cancelled at the last minute provoking open criticism from the outspoken Minister for Integration and Cooperation, Andrea Riccardi, for Alemanno’s lack of concern for the city’s rom communities. Riccardi also wants to block racist websites; he was attacked by one of them, Stormfront.

Sunday was not just a day of memory – the issues are still very much with us.