Feed the hungry this Christmas 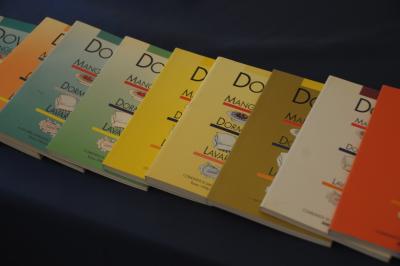 Past editions of the guide 'Dove mangiare - dormire - lavarsi"

ROME – The Sant'Egidio  Community is offering the homeless a wonderful Christmas gift: a 'Where to eat, sleep and wash' guide to Rome, or 'Michelin Guide for the poor'.

This year's 'Dove mangiare – dormire – lavarsi' is the 23rd edition of the guide produced by the Community of Sant'Egidio. It lists places that provide free (or subsidised) meals, beds and washing facilities, as well as pointing out other useful information such as emergency phone numbers and social services. 12,000 copies will be distributed freely to those in need in and around Rome, thanks to funding by Ferrovie dello Stato Italiano. “We want to give it to them as a Christmas present,” said Mario Marazziti, spokesperson for the Community.

The guide lists 33 soup kitchens, 40 overnight shelters, 16 centres with washing facilities and 24 centres offering medical aid, as well as 105 guidance centres, 14 helplines, 2 language schools and 46 drug and alcohol help centres. All of these places are marked on a map of Rome included at the end of the guide. “It's a map of the solidarity of Rome,” said Marazziti, “which shows that even in times of crisis the city still has a lot to offer.”

The guide is published annually in order to remain up to date, as “even one wrong trip on empty is one too many”, said Marazziti. The services change from year to year, as needs change. Marazziti highlighted the increasing need for help for those addicted to drugs or alcohol, and the opening of two new centres in response to this, bringing the total listed in the guide to 46. Sant'Egidio is beginning to provide more services in the suburbs of the capital too, as poverty is increasingly moving away from the centre.

The Community provides statistics in an attempt to map trends and best assist those in need, by gathering data from those who come to them for help. Traditionally, Italians have made up only a very small part of those they help, but the crisis has changed this. Their soup kitchen in via Dandolo welcomed a total of 180,000 people between its opening in 1988 and 2011, with just 15,000 of those being Italians (8,3 percent). In 2012, 22.6 percent of those who came to the soup kitchen were Italian nationals.

Many of the people who come to Sant'Egidio for help are not homeless; half of those who call their helpline have homes, but call in because they have various problems they feel they cannot solve alone. Many of these people are at a risk of losing their homes and/or jobs, and if nothing is done the large number of 'poor' could slip into the category of the 'extremely poor'.

Prisoners are at the heart of the community's work at the moment, as prisons are “where extreme poverty risks becoming fatal” said Marazziti, referring not only to the abnormally high rate of suicide amongst prisoners but also among prison surveillance staff in Italy. Prisons are overcrowded and underfunded – only 3,50€ is allocated per prisoner per day for food. He called for the laws leading to prison overcrowding to be changed, by encouraging alternative sentences in some cases and lighter ones in others, highlighting the frequent discrepancy between the severity of the crime and the harshness of the sentence.

The Community of Sant'Egidio started its first Christmas lunch for the poor in 1982, when a group of people from the church of Santa Maria in Trastevere decided to do something to include the excluded during this family-oriented time of the year. This became “contagious”, as Marazziti put it, and this Christmas a free lunch will be provided in eight different places across Rome, feeding 2,000 people. And this is a phenomenon which is echoed across over 40 Italian cities, and many other countries worldwide. It was concluded that “the world can change for the better.”

Most of the services listed in the guide depend partly or entirely on volunteers and donations, so if you find yourself with some spare time these holidays, why not find out where you can help?