Scientists quake over jail sentence – but shouldn’t have to 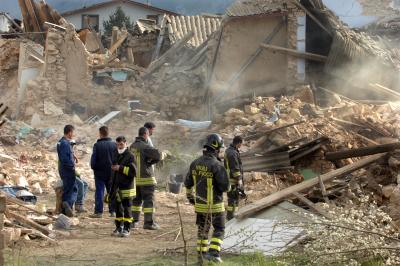 The aftermath of the Aquila earthquake. Photo credit: Nick Cornish

The Italian justice system doesn’t have the best reputation, but just like in Italian politics, we keep looking for a sign of change. And sometimes we find it. But too often we see examples that instead support the stereotype.

Six scientists and one government official received a prison sentence for having “falsely reassured” the inhabitants of Aquilabefore the 2009 earthquake. They have been condemned for manslaughter over the 309 people who lost their lives in the disaster. The scientists have not been convicted for failing to predict the earthquake – they’re almost impossible to predict with any certainty – but for having mis-communicated the possible danger to the inhabitants.

We think the judgement is fundamentally wrong. Communicating is the job of governing bodies: government officials, town mayors, the police… whoever’s job it is to make sure the population is safe. What makes a good scientist – seismologist – is hardly a degree in communication.

If this case sets precedence, the likelihood of tragic loss of life due to natural disasters will only increase. Scientists will remain noncommittal, or will avoid making statements altogether, and politicians will have less information at their disposal with which to guide citizens.

Scientists with advisory roles should not be devoid of responsibility – we want them to take their job seriously, for a maximum of lives to be saved. But facing jail in case of error is clearly not going to help.

Solutions can be found. In Britain, an insurance guarantees professional indemnity to Met Office employees, meaning that if a forecaster makes a wrong prediction, any legal action – for example over loss of life – will be covered by the insurance. Although it is the forecaster’s job to predict the weather, and announce any predictable danger, it is the Met Office’s job to check those statements and to render them public, accompanied by the relevant warnings.

In today’s society, where legal action is all too common, individuals who are ultimately working for the protection of life should be protected themselves. It is public bodies who should be shouldering the brunt of any complaint. And when a mistake is made, they should take responsibility.