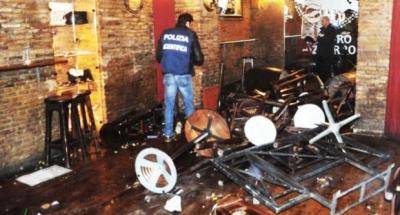 ROME – Ten Tottenham Hotspur supporters, in Rome for a football match, were injured in an anti-semitic attack Thursday morning. One was seriously hurt.

Two men have been arrested for attempted murder, police report.

The football fans were in the ‘Drunken Ship’ pub, near the city centre, when at 1.30am a group of people with their faces covered entered the pub armed with makeshift weapons and started a fight.

The bar was wrecked in the brawl and the attackers pursued the Spurs supporters out onto the streets.

One man is in critical condition in hospital after he was stabbed. Some of the others who were injured have already been released from hospital, the British Embassy said.

The Spurs supporters, mainly British, were in Italy to see the Europa League match.

The police have arrested five suspects after viewing CCTV footage. It was first believed the attackers were supporters of the Lazio football team, who are to play the Spurs today in Rome. However the two who have been charged are said to be supporters of the Roma team. Both are Italians.

A spokesperson for the British Embassy have said they are “in contact with the Italian authorities and the Italian Police, who are investigating the incident and have confirmed there will be increased security measures for the game this evening.”

They are also in contact with the hospitals where the injured are being treated.

The number of attackers has been reported as anything from 30 to 100. Locals declared they had “never seen anything like it”, though football-related violence is not uncommon in Italy.

In 2007 a policeman was killed by rioting football fans. As a result, all football matches were cancelled until new security measures could be met by football clubs.

The police are currently entertaining the hypothesis that this morning's attacks were linked more to racism than to football, as cries of “Jews!” were reported by witnesses.