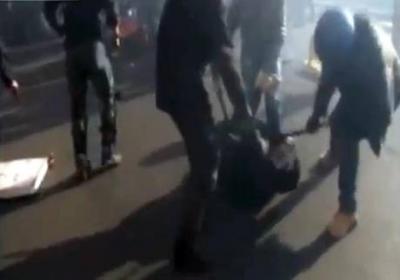 ROME – Violence in last week’s demonstrations was "inadmissible" on both sides.

Shocking images, videos and reports have been issued on the internet since the demonstrations on Nov. 14. One of them shows a young man being held to the ground by two policemen as a third hits him in the face with a truncheon.

The youth has been identified as Massimo d’Angelo, from Arezzo, and one of the three policemen in the video has also been identified. A disciplinary investigation within the police has been launched in an attempt to clarify the case. D’Angelo’s lawyer, Federica Brancaccio, is considering whether or not to make an official complaint.

The results of the investigation could result in the suspension of the officer from service.

Many of the law enforcement agents featured in such images and videos are yet to be identified, a process made difficult by their helmets often obscuring their features. The images have helped identify some of the most violent protestors.

The investigation, being undertaken by Magistrate Luca Tescaroli, has two sides to it: identifying the policemen who abused of their position and identifying the protestors who used violence against police forces.

In an interview with Repubblica, Minister of the Interior Annamaria Cancellieri assured that law enforcement officers using excessive violence would be punished. “Hitting defenceless people is inadmissible but those protesting must respect the law. The whole country was protesting and no-one respected the allowed methods,” she said.

There have been various complaints from members of the public of being subject to violence by officers during the demonstrations. Many of these cases will be taken to court.

The Italian state does not provide policemen with any financial assistance for judicial cases relative to their duties. Il Giornale has launched a fundraiser to financially assist officers who were injured or are being taken to court. The funds will help with both medical and legal fees.

The demonstrations took place across Italyand Europe. In Turin a policeman was agressed by protestors wielding a baseball bat. In Rome 16 law enforcement officers were injured, including ten policemen.