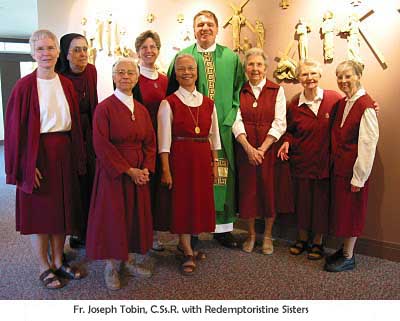 A file picture of Archbishop Tobin with Redemptoristine sisters

Archbishop Tobin, 60, had been appointed Secretary of the Congregation for Religious as recently as August 2010 for what would normally be a five year term and had quickly become the leading voice for reconciliation with women religious.

His surprise transfer, announced in October, to be Archbishop of Indianapolis, while by no means a demotion, was seen by Vatican watchers as the Pope responding to pressure by conservative American bishops irked by what they saw as the moderate prelate’s soft line on dissent among American nuns in his key position as secretary for the Congregation for Institutes of Consecrated life and Societies of Apostolic Life, Holy See sources said.

The Vatican Secretary of State, Cardinal Tarcisio Bertone, had sought to persuade the German pontiff not to ratify the transfer request by the American hardliners but Benedict did not respond to the Vatican prime minister’s entreaties, the sources said, speaking on condition they not be named.