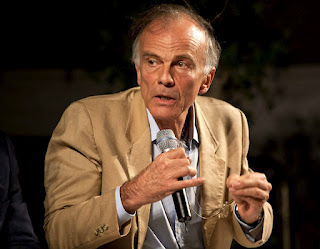 ROME- Summer in Italy is not just sun and sea, pasta and pizza, there is culture too, music for all tastes but also quite serious discussions.

This was one of those summer initiatives that Italy is so good at; a beautiful setting, a balmy temperature and a good roundtable debate sandwiched between a good meal and divine almond and then blackberry granite or granulated water ice.

For the last three years, the Reggio based online paper, Strill.it, has organised “Tabularasa” a month long series of encounters and debates on a wide variety of subjects. Local and visiting speakers sit on a stage overlooking the Straits of Messina with a public seeking the evening cool and perhaps some enlightenment.

On my evening, we considered the merits and faults of the Italian and American university systems. The panel was made up of Salvatore Berlingò, a Roman lawyer and rector of Reggio’s University for Foreigners, Francesco Russo, an engineer from the University of Reggio Calabria, Susana Cavallo, from Loyola University’s Rome Campus, Massimiliano Ferrara, political scientist and functionary from the Calabrian regional government and Phil Pullella, Reuters’ Vatican correspondent. The discussion was chaired by the two editors of strill.it, Raffaele Mortelliti and Giusva Branca. Some of us had experience in both systems, some only in one.

The two most important questions at the basis of any discussion on this topic have to be – what are universities for? And how should they be financed?

Italy is unclear on both questions. There is a presumption that universities are primarily research institutions and that faculty should above all be judged on their production. And yet successive governments have consistently reduced funding for research. There is also a lack of consensus on how faculty should be rated and two of the panel had a heated discussion on that point – today there are new criteria, more or less international, which are being used to grade academics but Italy is still a long way from adopting the UK quality assessment methods or the US outcomes assessment. Particularly in the humanities, there are many Italians who feel that supposedly “Anglo-Saxon” criteria of peer review and citations in scientific journals miss the point. Maybe, but they do not come up with more convincing metres. This was the division between the Roman lawyer and the engineer on our panel.

On the cost side, there is even less consensus. Italian students are beginning to pay real money especially when they also have to pay for bed and board away from home, though the costs are still tiny compared to the US or even the US, they are much higher than in Scandinavia, say.

Student loan debt in the US is apparently now greater than mortgage debt for houses. UK student enrollment is down because of rising costs. The prospect of starting one’s working life seriously in debt is already discouraging British students from going to university.

For all the disadvantages of costly education, the cash nexus does mean that students are much more central to universities’ raison d’être. The buzzword for decades has been “student-centered learning” in the US. In the American system, we have to concentrate on what we expect students to have learned or be able to do after a class, a course or a degree. Not what we are teaching. The substance is almost identical but the focus is reversed. Whereas in the Italian system, I am very conscious of colleagues concentrating on their own skills and erudition rather than what the skills or knowledge that the students should acquire.

The US is far more responsive to the market – not just for jobs or for who will set up an endowment fund but also to social demands. The pressures are more varied than in Italy: students, social demands, commercial and industrial demands, city, state and sometimes federal government demands. Pluralism in education, as in government contributes to democracy. In Italy, the pressure is limited to the universities and the ministry with occasional outbursts from students when the situation is already terrible. Today there is an increasing input from the private sector but it is still a long way from the American model.

The American system is more democratic in the pressures that move university policy but is seriously flawed in internal university governance which in the majority of cases is structured more like a heirarchical business corporation than the traditional European model of an universitas studiorum where responsibility lies with faculty rather than boards of directors formed by outsider appointed officials. This model is unfortunately taking over in many parts of Europe too. Even in Italy where the system went too far in the other direction with university barons running a feudal power system, today there are administrative boards made up of local businessmen and politicians who are beginning to dictate policy as well as managing teaching content, research and even employment .

Another difference that many Italians, even those who work in universities, forget about is the huge difference in quality within the US system. Italians often presume that all American universities are Ivy League schools. There is an abyss between them and a backwoods community college, or worse, some radical religious foundations or for-profit institutions, whereas Italian state universities and even and private or religious institutions show less difference.

A point which we all made is that American higher education is mostly residential so that students are able to take advantage of much more than lectures in classrooms; sport, culture and above all student social life in which in its best version, students from different social and ethnic backgrounds studying different disciplines exchange ideas and form lasting friendships.

Most importantly, the American universities are based primarily on merit which the Italian ones mostly are not; we also discussed legality in the systems. A colleague here at the American University of Rome, Francesca Conti has studied Italians who leave the country to work in Britain; a recurrant theme is the difficulty of being judged on merit in Italy. In an article to be published in the Bulletin of Italian Politics, she quotes a graduate from the south of Italy who had moved to Britain and who speaks for many of her respondants:

The United Kingdom has offered me things which I would have never had in Italy. What I adore about this country is that they judge you for what you can do; there may be internal games but, in my case, I think that I would have never managed to get to the same position in Italy.

As if to underline this point and the one we addressed at Tabularasa explain, the day after the discussion, one of the local papers had an article about the 26 year old son of a local boss providing help to pass university entrance exams. He had shown his own mettle by passing 9 exams in 41 days. It shows how the Calabrian mafia, the ndrangheta adapts to modern needs and loses no opportunity for power and profit; it also makes my point that merit is secondary quality, far less important than loyalty and having the right friends.

The bane of the Italian system is the raccomandazione. 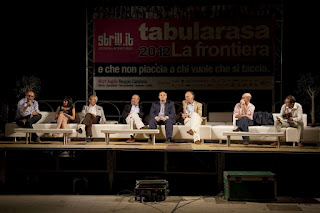