Afghan refugees to be welcomed in Italy 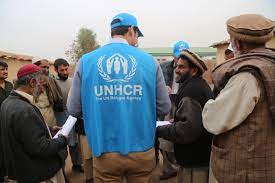 UNHCR worker with refugees in Pakistan

ROME – More than one hundred Afghan refugees were due to arrive in Fiumicino on Thursday via humanitarian corridors, church sources said.

The plan came about thanks to a protocol arranged between the state and a group of religious and civilian organisations.

The 158 Afghan refugees were due to arrive Thursday morning on a flight from Islamabad, via humanitarian corridors fostered by the Italian Episcopal Conference (through Caritas Italy), the Community of Sant’Egidio, the Federation of Evangelical Churches in Italy, Tavola Valdese, the Italian Recreational and Cultural Association, the International Organisation for Migration, the National Institute for Health, Migration and Poverty and the United Nations High Commissioner for Refugees.

The Afghan citizens, sheltered in Pakistan since August 2021, were to be housed in various regions and led quickly towards integration by learning the Italian language and with job placements. All this was thanks to a project funded entirely by the bodies involved and supported not only by the generosity and commitment of many Italian citizens, who offered to host refugees in their homes, but also by the religious community, NGOs and various religious and civilian organisations.