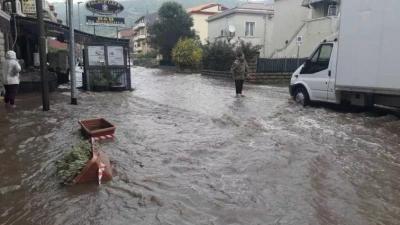 ORISTANO – The Sardinian town of Bosa was left underwater after heavy rainfall on Tuesday morning, while the flood defence system MOSE was activated in Venice as downpours and high winds battered Italian coastlines, coastguards said.

Authorities declared a weather warning for every region in Italy, with Abruzzo and Sardinia being put on red alert, the highest level.

Rainstorms and strong winds struck the West coast of Sardinia, where the province of Oristano was worst hit. The small town of Bosa, at the mouth of the Temo river, sits only two metres above sea level. Its streets were turned into rivers as swathes of the settlement were partially submerged on Tuesday morning. In the same region, a tree was blown over and smashed the windows of a kiosk in Torre Grande. The mayors of Oristano and Bosa, as well as some in Nuoro, ordered the closure of schools and public parks as a precaution. In addition, motorists were advised to avoid underground tunnels.

The Roman coast suffered one of the most violent storm surges in recent years, with waves up to three metres high ravaging the beaches around Ostia.

In Palermo a car was crushed but no one was injured when a lamppost fell in the gales, which in certain regions reached speeds of almost 100km per hour.

Authorities in Venice activated the MOSE (Experimental Electromechanical Module) flood defence system to protect the lagoon-based city from exceptionally high tides.  All three inlets of the system were closed in anticipation of a surge of 170cm.