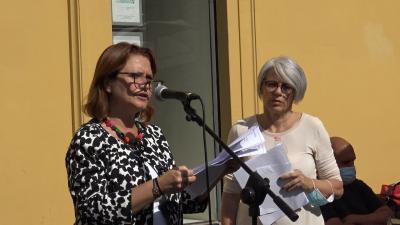 Elisa Ercoli, the president of the Differnza Donna association.

ROME – There are 736 million women who are victims of internet violence and harassment worldwide, and 35 percent report lasting mental distress, the UK embassy in Rome reported at a press conference discussing women’s online safety. At the press conference on Thursday, there were concerns that the growth of online harassment of women will discourage women from being visible online and in the public sphere. UK ambassador to Italy, Edward Llewellyn, said, “Web-based violence impacts women both individually and socially as a group. This is a growing phenomenon, especially against women who play a prominent role in public life.”

The UK and Canadian embassies planned this press conference with the help of the association, “Differenza Donna” in time for the International Day against Violence against Women that is set on Nov. 25 by the United Nations. The president of the Differenza Donna association, Elisa Ercoli, was present at the conference, where she said, “The web is a toxic environment for women – the company Meta intercepts more than 500 thousand reports of photos and content shared without the consent of the person concerned every month. Violent messages are conveyed on the various platforms every 30 seconds aimed at women engaged in politics with the goal of the women resigning.”

Ercoli and Llewellyn went on to express concerns about women in positions or running for positions in political offices. Ercoli pointed out the numerous threats of rape that US congresswoman, Alexandra Ocasio Cortez has received. The messages are overtly violent and dehumanizing, attempting to strip away her power in politics, and this situation is far from unique.

Platforms such as Twitter, TikTok, and YouTube have hundreds of thousands of examples of posts encouraging these messages. The most popular social media platforms even have several pornographic videos that were posted without participants’ consent, some including minors, the conference reported. Despite women’s efforts to get videos removed and otherwise protect themselves on the internet, the amount of violence is too large to be controlled.

The women victimized by this online harassment and violence suffer consequences that extend beyond the internet. Llewellyn reported that “35 percent of women report mental health damage and 7 percent lost their jobs” over these social media posts. As Ercoli deduced, the goal of these internet harassers is to “reaffirm the white, straight man through the web, intimidating and distancing women from public affirmation.” This ultimately leads to fewer women partcipating in public offieces or on the internet at all.