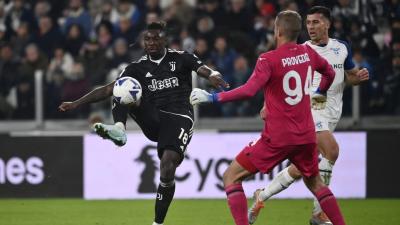 TURIN – Juventus won their sixth consecutive Serie A match by beating Lazio at home. The 3 – 0 victory on Sunday evening took the team from Turin to third place in the league.

While the Roman visitors held greater possession, the Bianconeri created many more chances, exploiting space on the left side of the field with regular counterattacks in the first half. The opening goal came just before the break, when French midfielder Adrien Rabiot reclaimed possession and lobbed the ball over the Lazio defence to striker Moise Kean. The Juventus forward then took advantage of a misjudged charge by Ivan Provedel to loop the ball over the out of position Lazio goalkeeper and into the net.

Kean scored again shortly after play resumed, when a low shot from Serbian Filip Kostić was parried by Provedel straight into the forward’s path, who tapped the ball into the unguarded net. Substitute Federico Chiesa orchestrated the Bianconeri’s final goal in the 89th minute with a low pass across the box that reached his Polish teammate Arkadiusz Milik. The striker only had to redirect the ball between the posts and the match was settled.

Lazio looked ineffectual without talismanic striker Ciro Immobile, who is sidelined with a hamstring injury, whereas Juventus have now played six games without conceding. The Biancocelesti fell from second to fourth in the league, while the Bianconeri rose to third, behind only Napoli and Milan.

On Saturday Napoli beat Udinese 3 – 2 at the Stadio Diego Armando Maradona, meaning they have now won 11 games in a row in the Serie A. Milan dramatically overcame Fiorentina 2 – 1 at home on Sunday with a goal in added time. Roma drew 1- 1 with Torino at the Stadio Olimpico, while Atalanta lost at home to Inter 2 – 3.