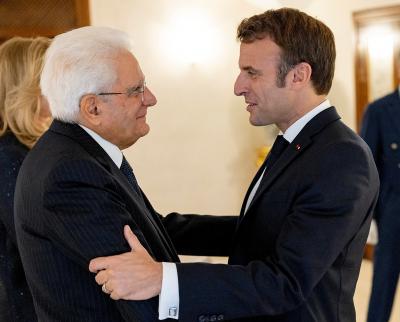 ROME – Tensions continued to rise between Italy and France over the migrant crisis, with Italian President Sergio Mattarella intervening in an attempt to defuse the situation.

A statement from the Quirinal palace on Monday confirmed that Mattarella had spoken to the French President, Emmanuel Macron, to address the problems around migrants crossing the Mediterranean. During the telephone call the pair “affirmed the importance of relations between the two countries and agreed on the need to implement conditions for full collaboration in every sector, whether bilaterally or under the European Union.”

Antipathy between the two nations had been growing since Sunday, when spokesman for the French government Olivier Véran criticised Italy’s refusal of the rescue ship Ocean Viking and the migrants onboard. The minister said that France considered the action to be a “unilateral, unacceptable, ineffective and unjust decision by the current Italian government, one that demands a European reaction.”

The response from the Italian government came on Monday morning, in an interview given by Minister of Parliamentary Relations, Luca Ciriani, to Corriere della Sera.

“Italy and France are linked by an old friendship, culturally as well as politically. But immigration is a big problem, I do not understand the exaggerated and haphazard response from France. Evidently Macron has an internal problem, public opinion in France demands a strong line on migration. It is not clear why the same cannot be true for Italy, who have welcomed 90,000 migrants this year, of which only 38 have been relocated to France.  We cannot continue to pretend that nothing has happened, Europe needs to take action.”

Interior Minister Matteo Piantedosi will address the Italian parliament on Wednesday to outline the government’s plan for the migration crisis, which is reported to include bilateral deals with countries of origin and a code for private ships rescuing migrants at sea.