Cinisi gateway to secret Sicily opens up to visitors 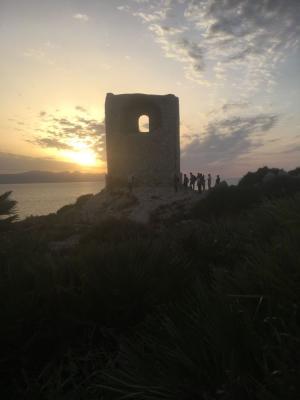 CINISI, Sicily -- One of Sicily's least known and most enchanting districts featuring both a stunning coastline and breathtaking mountains is making a concerted effort to attract tourists thanks to the creative sustainable tourism project dubbed "Tuscinos."

The municipality of Cinisi invited journalists and travel bloggers to explore the dazzling territory that adjoins Palermo's Falcone and Borsellino airport. Millions of visitors see the comune's rugged shores and coves as they arrive in Sicily by jetliner. But until now most were immediately whisked to the city, missing the dazzling attractions available without travelling any further than a stone’s throw from the runways.

Much of the Cinisi coastline is part of the spectacular Capo Rama nature reserve that is managed by the Italian chapter of the World WIldlife Fund. Laura Jenko, a WWF guide, showed reporters how the charity had erected fences and gates next to a coastal road to prevent the pernisicious practise of dumping local companies dumping waste in the sea. Wildlife has returned to the area in the form of rabbits and wild asparagus plants thrive on the path to a Norman watchtower perched on a spur.

The following day we explored the coast from a boat which entered some of the large caves that honeycomb the cliffs, stopping three times to swim and dive. Sicily at times can be too hot for northern visitors in August but the weather was perfect in September during our visit.

Having savoured the marine delights it was time to head into the mountains. We travelled on horseback from a local stable on the steep ascent to the peaceful centuriesold Catholic sanctuary of Madonna del Furi. The tranquil setting nestling in the mountains is a pleasant contrast to the better-known Norman masterpieces in easy reach of CInisi such as the Monreale Cathedral, which attracts thousands of cruise ship passengers each Thursday during the tourist season.

In addition to hiking, swimming and boating, Cinisi has much to offer to gourmands who appreciate Sicilian cuisine and the island's flourishing wine industry. Old style Sicilian hospitality was offered during a picnic lunch of mozzarella, cheeses and salami at the Tenute Inghilleri whose lady owner Maria Grazia Inghilleri cultivates some 50 hectares of vines, producing both Chardonnay and the fierce red vintage Nero d'Avola.

Also hospitable was another local wine producer, Count Filippo Testa, who has recounted the history of his tenuta in a memoir translated into English as "The Vine Whisperer, A Siclian winemaler's tale."

The count and co-author Susannah Elliott recounts how as a young man he gave up a career as a jazz pianist when he inherited the property and then bravely faced down an attempt by the Cosa Nostra to force him to sell the family estate to the Mafia. The turning point in his battle came when anti-Mafia crusader Judge Giovanni Falcone was murdered May 23, 1992, forcing the Italian state to react strongly against organised crime.

Count Testa recalls meeting the judge in Palermo. "Falcone was a really fantastic person, a great man with the power and intelligence to fight the Mafia and to win a lot."

"The Mafia made the biggest error when they killed him. Now in Sicily it is very quiet. But of course Cosa Nostra is an octopus. The Mafia stays where there is money."

"The Mafia of the countryside is always the same. They now respect me. When I meet this type of person they offer me a coffee like a normal person. But the bosses are all in prison."

"I won because the Mafia people are very stupid, they are not very intelligent. My strategy was to hire young people from the Mafia to work on the estate and then wash their brains. They began to ask themselves 'why were we so bad with Filippo.' I asked them do you really want to spend your lives going in and out of prison. In the end all those boys were with me."

In addition to the wine farm the count has an agriturismo business that has been open 25 years on his 35 hectare estate. He has four double rooms and two apartments. Guests can enjoy wine tasting and cookery classes.

Despite securing his estate the count acknowledges that the struggle against the mob remains a priority. "Now there are elections in Italy and the Mafia works in the background," he said.

The count has introduced other innovations in wine production. "My father used pesticides but now we are totally organic. You need time and a lot of passion to make wine. Every morning I get up at 5 a.m. to look at the vines. Organic agriculture needs your presence every day."

Another local speciality are the distinctive black Cinisi cattle used to produce ricotta and straciatella. Much of the ricotta finds its way into the delicious Cassata cakes and cannoli produced by local pasticcerias.

Visitors interested to learn more about traditional Sicilian folklore might want to watch one of the lively shows staged by the dance group Quelli della ControDanza who performed for journalists and travel bloggers in the courtyard of the Cinisi local history museum. 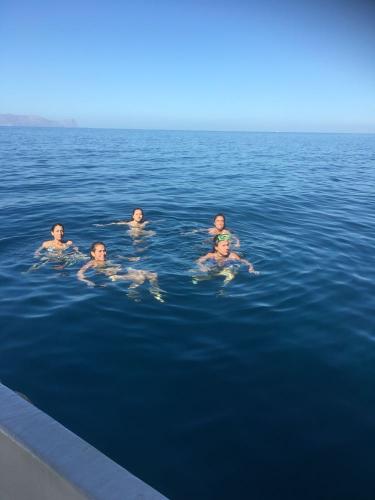 Swimming in one of the coastline's dazzling coves 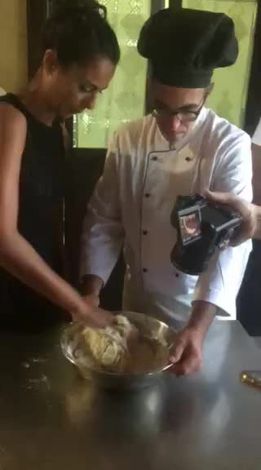