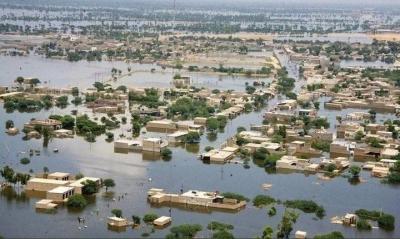 ROME – As world leaders gather at the UN Climate Change Conference (COP27) in Egypt, the United Nations World Food Programme (WFP) is calling on the international community to invest in building the resilience of vulnerable communities living on the frontlines of the climate crisis in Pakistan and other climate hotspots.

The Pakistan floods – which inundated a third of the country - claimed over 1,700 lives, uprooted eight million people, and destroyed homes, schools, health facilities, roads, bridges, and other infrastructure. The floods condemned already vulnerable families in rural and urban areas to even more acute hunger – hunger so severe it threatens lives and livelihoods.

“The floods in Pakistan provide ample evidence of how the climate crisis is devastating lives, livelihoods, and infrastructure. The heatwave over the summer saw Pakistan becoming the hottest place on the planet. Melting glaciers and parched ground conspired to make the monsoon infinitely more devastating,” said Chris Kaye, WFP’s Country Director in Pakistan.

“The sad truth is that Pakistan – and other countries on the frontlines of the climate crisis – will continue to experience more extreme climate shocks and we need to prepare communities to weather the coming storm,” Kaye added.

The sheer scale of the loss and damage incurred due to the floods is laid out in the Government-led Post-Disaster Needs Assessment (PDNA) - released last week - which put the total cost of the floods at USD 30 billion - 14.9 billion in damages and 15.2 billion in losses. The agriculture, food, livestock, and fisheries sectors were particularly hard-hit, with millions of acres of cropland submerged and more than a million heads of livestock killed. Precious stocks of food and seeds – and valuable topsoil – were washed away, as were much of the country’s ready-to-harvest cotton, sugarcane, and rice crops, traditionally top export earners.

The floods more than doubled the number of people needing emergency food assistance, taking it to a staggering 14.6 million. With large swathes of farmland still under water, the autumn wheat-planting season is now compromised, raising fears of significant scarcities of the country’s staple grain, and prohibitively high prices – a painful prospect given the ongoing volatility of global commodity markets.

The floods in Pakistan came on the heels of a severe heatwave and drought, which saw scorching temperatures consistently above 45°C. This triggered unusually heavy melting of the country’s northern glaciers, followed by the heaviest monsoon rains on record culminating in catastrophic flooding.

Pakistan ranks among the 10 countries hardest hit by the climate crisis according to the Climate Risk Index. Yet the country has contributed less than half of one percent of global greenhouse gas emissions, highlighting the climate injustice of this catastrophe.

WFP is implementing a vital relief operation to help millions of flood-hit people in Pakistan survive the impact of the flooding. Having provided food, cash, nutritional and livelihoods support to more than two million of Pakistan’s most affected people so far, WFP is now working with the government and other partners to reach a total of 2.7 million of the worst off through May of next year, while expanding vital resilience-building activities. WFP has to date secured just 31 percent of the USD 225 million needed through May for crucial food, nutrition, and logistics interventions, and urgently needs support.

While emergency assistance staves off hunger in the short-term, food insecurity in Pakistan can only be meaningfully addressed by adequate investment in tackling root causes and helping to build the resilience of communities at the sharp end of the climate crisis.

Globally, WFP is working on the frontlines of hunger and climate helping vulnerable communities adapt to the climate crisis. WFP’s work includes anticipating climate hazards before they turn into disasters by using early warning systems to trigger preventative action, restoring degraded ecosystems that serve as natural shields against climate impacts and protecting the most vulnerable with financial safety nets and insurance schemes.